The Cherokee Central School Board of Education spent their latest meeting focusing on approving several positions before the start of the school year. 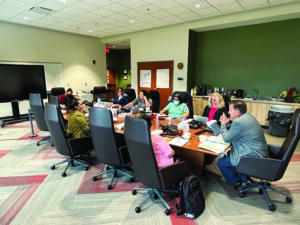 The Cherokee Central School Board of Education spent their latest meeting (Monday, Aug. 1) focusing on approving several positions before the start of the school year. (JONAH LOSSIAH/One Feather photo)

There was less than an hour of open discussion in this meeting held Monday, Aug. 1, as much of the time spent was in closed session or for Board training.

All but one item listed on the agenda was passed, though that item was from an email poll that took place on July 22. Resolution 23-012 to approve Chazi Blankenship as a professional specialist was killed. There was no further discussion on this resolution.

The resolution to approve Diane Driver as the new CCS administrative assistant was pulled and voted on individually following the closed session. The Board passed this resolution 4-2, with Melanie Lambert and Berdie Toineeta voting against.

The consent agenda was approved, putting forth the following:

There were several walk-in resolutions, each of which were approved:

The School Board also held an email poll on July 22 and approved the following resolutions:

The only guest to the meeting was Cherokee Indian Police Dept. Chief of Police Carla Neadeau. She was there to formerly introduce herself to the Board at their request. The Board and Superintendent Michael Murray thanked Chief Neadeau for the relationship they have had with the Cherokee Indian Police Department over the last year, and Chief Neadeau said that she was focused on building on that work.

The next meeting of the CCS Board of Education is set for Monday, Aug. 15 at 4:45 p.m. Meetings are being held in the Administrative Offices at Cherokee Central Schools. These meetings are open to the public unless there is a call for an executive session.