Most of the Thursday, June 23 meeting of the Cherokee Central Schools (CCS) Board of Education was spent in a closed session to discuss personnel issues.

The first part of the meeting was open and began with an update of the finances on the school and the Board. Ashford Smith, of the Cherokee Boys Club, and Howard Wahnetah, of CCS Finance, were present to offer these reports. 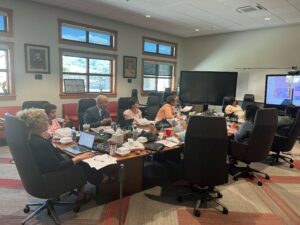 Most of the Thursday, June 23 meeting of the Cherokee Central Schools (CCS) Board of Education was spent in a closed session to discuss personnel issues. (JONAH LOSSIAH/One Feather photo)

Smith illuminated a concern over budget use. He pointed out that the school had only used 75 percent of the annual budget. This is much less than the projected 92 percent for this time. He said that there are several reasons for this, and that is why he does not wish to reduce next year’s budget. With the pandemic continuing to make school life difficult, there were several budget lines that did not get used as much as hoped. Namely this is training and travel. Teachers and administrators were needed on-campus and did not have much flexibility to voluntarily leave for any extended period of time. Travel and training have only used 13 percent and 19 percent of their allotted budget, respectively.

Smith said the hope is that a full staff and less interrupted school year will see some of these expenditures used with more efficiency.

Assistant Superintendent Beverley Payne offered the ‘good news’ report. She presented a slideshow from a trip to Ocracoke that she attended with several CCS staff the week prior. It was a trip in collaboration with the Teacher Leadership Institute and grant supported by the Cherokee Preservation Foundation.

The unfinished business portion of the meeting addressed four topics. The first had to do with a transfer salary recommendation for a staff member. This issue was discussed in closed session and tabled. A new job description was approved for a SPED Parent Support position. HR Director Heather Driver said that they would begin advertising for the role soon. The Board also approved a stipend being offered to correct listed years of experience for Albert Arch.

There was a discussion over a piece of policy that had been previously discussed at the last Board meeting. This was Policy 4353, long term suspension. CCS-hired attorney John Henning said that the issue was that it was crafted to model North Carolina policy. However, it currently conflicts with EBCI Code. The Board unanimously agreed that they would have a conversation with Tribal Council Rep. T.W. Saunooke on the issue and would look to present a code change to accommodate the policy.

The consent agenda for Thursday’s meeting was unanimously approved, putting forth the following:

The Board then went into a closed session for just over two hours. Following the opening of the meeting, the Board agreed upon the next meeting dates and adjourned.

The next meeting of the CCS Board of Education is set for Monday, July 18 at 4:45 p.m. If necessary, an email poll amongst the members will be conducted on July 1. Meetings are being held in the Administrative Offices at Cherokee Central Schools. These meetings are open to the public unless there is a call for an executive session.