After 10 years, prolific rock band Kansas is coming back to the mountains of North Carolina and will play Harrah’s Cherokee Casino Resort this Saturday, June 25.

After nearly 50 years of gracing the stage, the band originally based out of Topeka is still pushing themselves in 2022. Rich Williams, who has been featured on every Kansas record, has seen each form the band. For him, it’s about consistently staying sharp and finding ways to adapt his sound.

“For musicians, and I think guitar players are really the worst of it, you’re never happy with what you got. So, as gear changes with new innovations, etc., you’re constantly in search of the holy grail of your voice in that equipment,” said Williams. 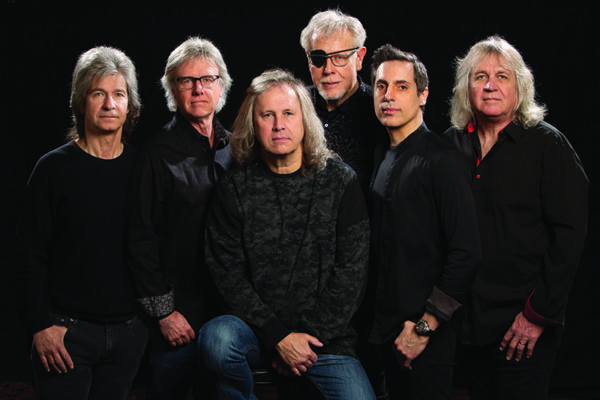 “I started with basically one guitar and an amp. Now I have a room full of stuff. I have stuff being delivered now. It is a constant evolution of finding your voice within the parameters of what’s available today.”

He said that he has been blessed and cursed with a fascination of new gear. Whether it be adding to the collection in his guitar room or finding smaller pieces while researching online, he’s always looking. A new toy that was waiting for him at his house was a Virtual Jeff Pro whammy bar that he couldn’t wait to try.

“I know this one guy that has a Les Paul and a Marshall amp that he bought 30 years ago, and he’s never had anything else. That’s his rig, he doesn’t want anything else. I envy the guy,” said Williams with a chuckle.

Williams loves to talk guitars and gear. Even the mistakes made along the way stick in his mind. That first guitar he had with Kansas was a Gibson 335, and the amp was a Marshall Lead 100.

“The band convinced me to sell the 335 because they said ‘that’s a cowboy guitar. You look like you’re in a country band.’ I listened, which was the stupidest thing I’ve ever done. I wish I still had that guitar. I went to the music store and I traded it for a Gibson L6-S, which is a solid body L6. That guitar is worth about 1,000 dollars today. Whereas the 335 is probably worth 20-grand.”

While the 335 isn’t in his collection, that guitar room is a place of practice and peace for Williams. Not too long ago, he and his wife decided to move to the mountains of North Carolina. It was a decision sparked by the arrival of the pandemic. They traveled all over the country but found themselves enchanted with the area. Eventually, they began to split their time 50/50 in North Carolina and Atlanta, where Kansas is now based. One day when they were leaving the mountains, he simply asked the question ‘what are we doing?’

“We see plenty of the world when we’re out on the road. It was time to find our forever home. A place that we can go to and just close the door on the world and just relax.”

Now when they’re off the road it’s calm mornings at their mountain abode.

“I’ll go into my guitar room and while I’m just messing around about four or five hours has gone by. I don’t force myself to do it. I’ll get up early in the morning. The sun’s coming up, I get a cup of coffee and go to my guitar room. Watch the sun come up and watch the animals running around the yard and just start playing. It’s a great way to start the day.”

Williams said that he is very excited to come back to Cherokee, especially now with home just down a couple hours down the road. He remembered fondly the last time they played in Cherokee with a sellout crowd. A major aspect that is different from 10 years ago is his lead singer.

Ronnie Platt took over the mic for Kansas in 2014. He said that touring has been tremendous since the band was able to get going again.

“It really has been great. It was wild to have that little interruption in time, which turned out to be not so little. We didn’t even see each other for 13 or 14 months. Rehearsing was just impossible because travel was so difficult. We’re spread all over the eastern half of the country,” said Platt.

“Even the shows we’ve done lately, there’s such an anticipation. You can feel the anticipation in the audience. The energy level is just so intense.”

He said that playing the casino often leads to a unique atmosphere, but it is one that he embraces.

“There are different elements as opposed to when we’re playing a theater, which is strictly a Kansas show that is attracting the fan that knows of Kansas or wants to see a Kansas. Whereas a casino, you’re getting a blend of the hardcore Kansas fan and that casino goer,” said Platt.

Platt has always been a fan of Kansas, well before he joined the band. He said that he loves how the band has adapted and grown over the decades. He said that’s what makes the live shows so much fun to be a part of.

“There’s always been continuity with the music. It’s one of the things that I have loved about this band, is how versatile the music is. From being really intense prog to some songs being in that pop vein. Or dare I say ‘commercial’. That’s a word that a lot of prog rockers don’t like,”

Platt said that the band members are consistently pushing each other to perform at the highest. It doesn’t matter how small the adjustment; they want to put on the strongest show that they can.

“Every once in a while, if we have a trip up or something, probably one percent or less of the audience is going to know that we made a little mistake. But to us, we remember that and we’re drilling it the next day. These are songs that we’ve done over and over again.”

Platt says the passion of his band members is a constant inspiration. He especially appreciates what Rich William and drummer Phil Ehart have provided, being the only two that have featured on every Kansas record.

“Since the band’s inception, it’s been around 50 years. The kudos go to Phil and Rich. To have that constant in the band always be here. That’s an inspiration in itself. For them to have such a love for the music and the band. And to keep it going all this time. It’s pretty incredible.”

You can purchase tickets for Kansas at Harrah’s Cherokee through https://www.caesars.com/harrahs-cherokee/shows. The show is set for a 7:30 p.m. on Saturday, June 25.