Three Cherokee citizens are featured in a new art show at the Atlanta Contemporary Art Center.  Luzene Hill, a member of the Eastern Band of Cherokee Indians, joins Cherokee Nation citizens Brenda Mallory and Kade Twist in the show entitled “Returns: Cherokee Diaspora and Art” which will run from  Saturday, June 11 and runs until Sept. 4. 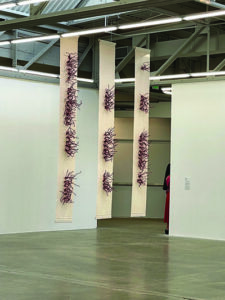 “Traces and Wounds”, a piece by EBCI artist Luzene Hill, is part of a show at the Atlanta Contemporary Art Center entitled “Returns: Cherokee Diaspora and Art” which will run from Saturday, June 11 and runs until Sept. 4. (Photos contributed by Luzene Hill)

Hill provided two pieces for the show entitled “Traces and Wounds” and “Now that the Gates of Hell are Closed”.  She feels the title of the show “is a broad reference to the feeling displacement that so many Native people feel – from being put on reservations far from their homelands, to boarding schools removing children from their homes and cultures, to the policy of termination in the 1950s, and the voluntary departure of Native young people away from tribal community in order to pursue careers, go to university, etc.”

On ‘Traces and Wounds’, Hill said, “This work presents three numbers – 1492, 574, and 6,956.  The first – the year a wave of invasions into the Americas began.  The second – the number of federally recognized tribal nations in the United States.  The third – the average reported number of Indigenous women sexually assaulted each year in the United States, from data collected over a 12-year period.”

Of the piece, she noted in her artistic statement, “Three panels with knotted cord abstractions of the Inka khipu, designate those significant numbers.  In a khipu, the knots represent numbers, an amount, a sum.  Unknotted strands and spaces indicate no number, zero.  These knots are the wounds.  Shadows of the loose cords, viewed from the front, are the traces.  On the back, the pull-through of the cords creates ‘loose ends’ reflecting the attitude of the U.S. government towards Indigenous people.  Unknotted strands symbolize the number of sexual assaults on Native American women that are not reported, not counted.”

On her second piece, Hill noted in her artistic statement, “When I was a freshman in college, a professor opened the first day of class by asking the young ladies on the front row to ‘please cross your legs’.  They complied, quizzically.  Then, he stated, ‘Now that the gates of hell are closed, we can begin’.  Decades later, never having forgotten that class, this is my response.” 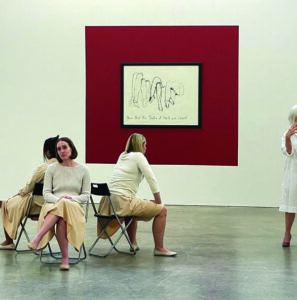 Hill’s piece “Now that the Gates of Hell are Closed”

She added, “The emergence of patriarchy obliterated matrilineal cultures, societies in which women had agency and sexual freedom – freedom of choice on so many levels.”

When asked about the importance for Native representation for her and others to show in large, metropolitan areas such as Atlanta, she noted, “I just saw a clip this afternoon of Seth Meyers interviewing Jana Schmiedling, of ‘Rutherford Falls’ (TV show on Peacock).  She mentioned in the interviews the crazy statistics about the dominant society in the U.S. not even realizing that Native people are alive today.  I hope this exhibit helps dispel that myth.  Native artists are doing all sorts of work – not just traditional crafts and not just representational art – that is iconographic.”

Another Native exhibit is currently up at the Atlanta Contemporary entitled “You Are Heleswv (Medicine)” which includes multiple Native artists including Nate Cummings-Lambert, an EBCI tribal member.  Of this exhibit, Hill stated, “The Atlanta Contemporary giving the entire exhibition space to two shows is remarkable, and I hope it generates interest and expands knowledge of contemporary Native people – not just the artists involved.”

For more information on the “Returns” show, visit: https://atlantacontemporary.org/exhibitions/returns