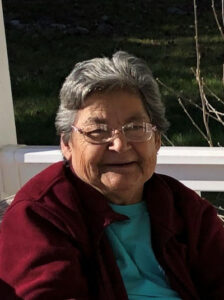 Lucy B. Teesateskie, commonly known as “Lucy T”, age 77, passed away on Wednesday, June 15, 2022 at Tsali Care Center after a brief illness.

A visitation will be held on Monday, June 20 at Cherokee Pentecostal Holiness Church, in the Wolftown Community, beginning at 5 p.m. until 10 p.m. A formal funeral service will take place on Tuesday, June 21 beginning at 11 a.m. with Tim Melton officiating. Burial will be in the Lucy T. Bigwitch Family Cemetery. Pallbearers will be among close family and friends.