For thousands of years, the area in the Great Smoky Mountains National Park called Clingman’s Dome was known to Cherokee people as Kuwahi (“mulberry place”).  Two Cherokee women are starting the process to change the name back to its roots.

Lavita Hill and Mary “Missy” Crowe, both members of the Eastern Band of Cherokee Indians (EBCI), have drafted legislation in the hopes of getting Tribal Council and EBCI Executive Office support for this idea.  The resolution has been submitted, and it is expected to be discussed during the July Tribal Council session. 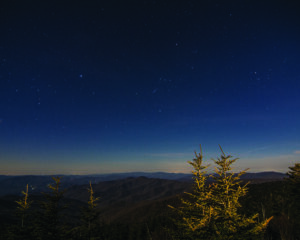 For thousands of years, the area in the Great Smoky Mountains National Park called Clingman’s Dome was known to Cherokee people as Kuwahi (“mulberry place”).  Two Cherokee women are starting the process to change the name back to its roots. (Photo by Thom McManus, NPS Flickr)

The resolution describes the area, “Kuwahi or ‘mulberry place’, is the highest point in our area and has significance to us as Cherokees as it was visited by medicine people who prayed and sought guidance from the Creator regarding important matters facing our people, and then returned to our towns to give guidance and advice.”

Crowe spoke of the history of the United Keetoowah Band of Cherokee Indians whose ancestors went west prior to the Indian Removal Act due to a prophecy an elder received at Kuwahi.  “It’s an important and significant historic place for our people.  We still recognize it today.”

She added, “When we look at the importance of these areas, it’s spiritual.”

In an article for the Oklahoma Historical Society, Josh Clough wrote, “Although the UKB (United Keetoowah Band of Cherokee) received congressional recognition in 1946 and ratified its constitution, bylaws, and corporate charter in 1950, its origins are considerably older.  Keetoowah people believe that ‘Kituwah’ or ‘Keetoowah’ is the true name of the Cherokee people given to them by the Creator atop a mountain peak known as Kuwahi.’”

Hill commented, “We understand that it’s going to be a tedious process and a fight. What this resolution does, it’s not saying ‘grant the name change’, it’s saying ‘support our action as we take the steps to attempt to address the proper channels that we can do this’. That’s what we’re hoping Tribal Council will read and will see and definitely support.”

She added, “Hopefully, our leadership will want to take it to the next level with the Park and then the Park will agree to it.”

That process starts with the filing of an application for a name change through the United States Board on Geographic Names (BGN).

Earlier this month, the BGN voted 15-0 to change the name of Mount Doane, located in the Yellowstone National Park, to First Peoples Mountain.  According to a press release from the National Park Service, “The peak was previously named after Gustavus Doane, a key member of the Washburn-Langford-Doane expedition in 1870 prior to Yellowstone becoming America’s first national park.  Research has shown that earlier that same year (1870), Doane led an attack, in response to the alleged murder of a white fur trader, on a band of Piegan Blackfeet.  During what is now known as the Marias Massacre, at least 173 American Indians were killed, including many women, elderly tribal members, and children suffering from smallpox.  Doane wrote fondly about this attack and bragged about it for the rest of his life.”

The name change in Yellowstone was spurred by recommendations from the Rocky Mountain Tribal Council.

Hill hopes to get community support as well as support from park officials.  “Where the Great Smoky Mountains National Park is now working with tribal members on the parking passes and things, I feel like something has started and we want that connection, we want a relationship, a friendship maybe.”

“This is a very important, special place to the Cherokee people. In our oral histories, in our written history, in our legends, it’s there. We’ve always had a tie to Clingman’s Dome – with medicine people, with councils just visiting the area.”

Crowe commented, “We have to be true to our history and that’s what we want to bring – that educational knowledge of our true history back to who we are as a people.”

Hill hopes that their efforts on the name change will also yield more opportunities to educate the public on Cherokee culture, history, language, etc.  “There are plenty of visitors to Clingman’s Dome, but there’s no history to what it meant to the Cherokee people. So, I feel like this is a great educational avenue.  It’s a great time to put that information out there on websites, at the place, everything.”