Cherokee culture and language were showcased during the “Night of Gadugi” at Cherokee Central Schools on the evening of Monday, June 13.  The event featured art displays and performances by the students who completed the Cherokee Cultural Summer School program. 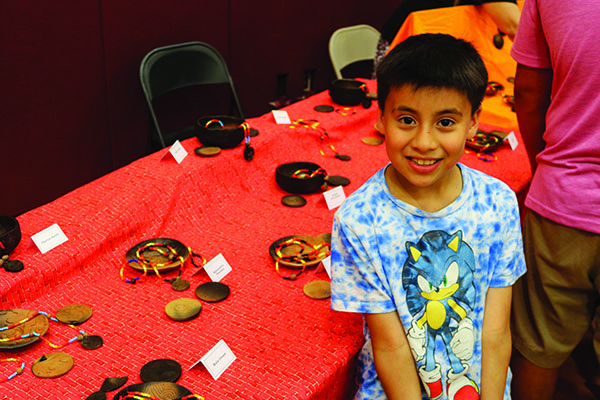 Kylexandra Pheasant, a rising third grader at Cherokee Elementary School, poses beside some of the Cherokee pottery pieces he made during Cultural Summer School. He is shown at the “Night of Gadugi” event held at Cherokee Central Schools on the evening of Monday, June 13. (SCOTT MCKIE B.P./One Feather photos)

“The goal of the program is to incorporate language and traditional artisanship, craftsmanship, and putting our children, our community members with elders who are master crafts-makers and also educators,” said Catcuce Tiger, Cherokee Language instructor at Cherokee Central Schools.  “It’s a good way to do outreach and kind of bring everything full circle – with language, with culture, with foods, with everything that displays the vibrant culture Cherokee people have.”

Tiger noted that the program is for students in first grade through 12th grade.  A total of 140 students were accepted into this year’s program which lasted a little longer than two weeks.  Students selected their favorite topics from a listing of 12 classes to take during the program.

“It’s a lot of work every year, but it’s good,” said Tiger.  “When you see all that in there, all those people, the community, coming together, kids laughing and smiling and displaying things they’ve made, it’s all worth it.  That’s why we do it.”

Students at Cultural Summer School perform the Cherokee Bear Dance during the “Night of Gadugi” event.

Butch Goings, an elder of the Eastern Band of Cherokee Indians, taught soapstone carving during the program.  Speaking about how he approaches teaching it to the students, he noted, “I told them, get it in your mind what you think it looks likes.  I think they’re doing really well to be so young.”

Laura Pinnix, Cherokee Language director at Cherokee Central Schools, commented, “If I had to talk for myself, I would have to say that keeping the Cherokee crafts and arts alive; that’s what I want to do.  We tie in a lot of the Cherokee language in how we’re doing this.  That’s really our goal.”

The following served as staff for the event: 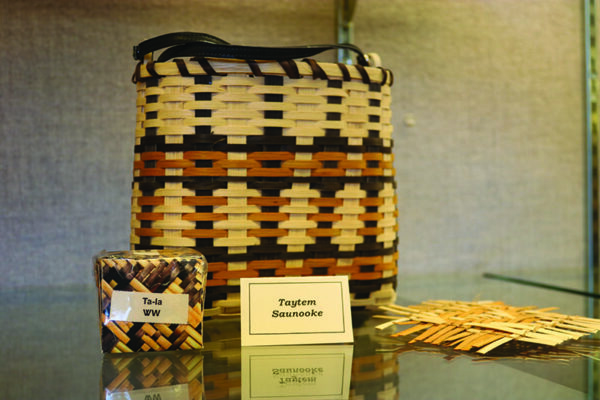