Captain Owl was there on behalf of Captain Carrie Wade, and he provided a quick update on the CIPD. 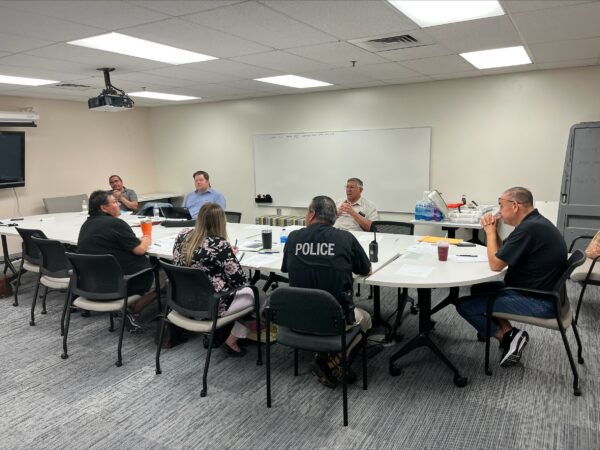 “We are going to get Axon, the other body cam and in-car cam system company. They’re coming next week or the next couple of weeks to give us a demo of their product.”

The Police Department has invested in getting new gear for each of the officers, and much of that has now been deployed.

“If you’ve been around, you’ve seen the officers, everybody is in their new uniforms now. Patrol officers. They look pretty sharp…we’re getting our new vehicles on the road too. You might have seen those out and about.”

One of the long-term changes that will be coming to the CIPD is the addition of a training program called Relias. This program is already being used at Cherokee Indian Hospital, and it can be specialized for different types of departments.

“We’re working on Relias. There are like four different meetings we have to have with them before we’re actually online with it. Right now, we are working on a career development path for officers. Which will be put into Relias. This is going to be all the training.”

Captain Owl said that using Relias will help to clarify and streamline the process of career development in the department.

“I’ll give you an example. If a patrol officer wants to become a detective or an investigator later on in their career, then they’re going to have to follow these trainings in Relias. And that’s going to be a requirement for them to even be considered for a promotion into a detective position, or any other position for that matter. Like a canine officer, swat team, if they want to be working on child victim crimes or elder abuse. Things like that.”

The Commissioners and Captain Owl had a discussion about shooter response on the Qualla Boundary as well. At several points, they made reference to the tragedy in Uvalde, Texas. Captain Owl talked about the current active shooter procedure, as well as some of the difficulties that can arise. Chris Siewers, of the EBCI Attorney General’s Office, asked if they study local layout for these situations.

“Yes. In the past days, whenever I was running the SWAT team, I had blueprints for all the buildings,” said Captain Owl.  “Which we do have those blueprints right now.”

Captain Owl offered the monthly CIPD statistics to the Commission. They reported the following:

The next meeting of the Police Commission is set for Thursday, July 21 at noon. The Commission gathers monthly and has been meeting in the large conference room at the Ginger Lynn Welch Complex. These sessions are open to tribal members until the Commission moves into an executive session.