For two days, pet parents lined up with their cats and dogs at the Cherokee Indian Fairgrounds for veterinary services.  Volunteers with the Christian Veterinary Mission, based in Washington state, provided the services on the Qualla Boundary for the first time on June 10-11. 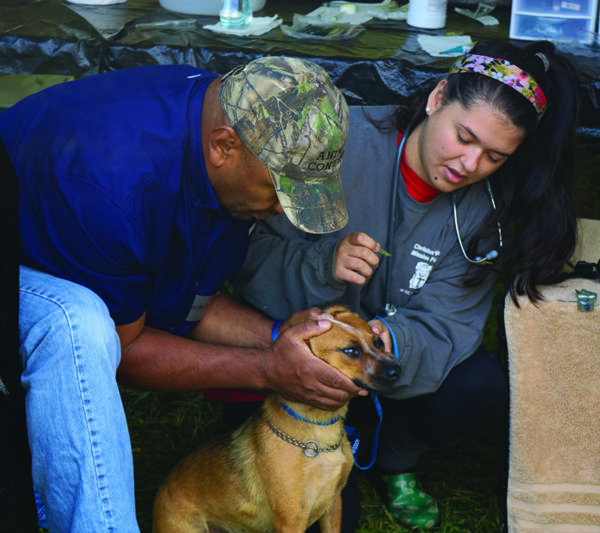 “We share Christ’s love through veterinary medicine,” said Dr. Page Wages, DVM, organizer and team leader with Christian Veterinary Mission.  “It’s a way to bring people together through animals, and then we get to chat with them a little about Christ.”

She said the team did about 50 various spay and neuter surgeries on Friday, June 10, and there was a sizeable line forming on Saturday morning.  “I lead trips, and we normally go to Robbinsville.  I’ve been doing that probably 15 years.”

Dr. Wages was very pleased with the turn-out in Cherokee.  “Everybody has been really receptive.  I think people are enjoying it.  It’s kind of a low-cost spay and neuter, but otherwise, we can just reach out and reach people.”

The event in Cherokee was a partnership between the Christian Veterinary Mission, Grace Community Church, and Cherokee Animal Control.

Scott Hill, pastor at Grace Community Church, said, “There’s just such a need on the reservation. As you guys know, pets roam. So, to do the shots to make sure they’re up on their vaccines and things, just for public safety and health and so forth. But, really, even more than that is just to minister to the community – folks that otherwise, because it’s expensive to get dogs spayed and neutered, it’s just an opportunity to say, ‘hey, if you want it done, here’s a low-cost alternative that we can help you out with.’ So, really to minister and to reach out and say, ‘let us come alongside of you and help you in this way’.”

He was also pleased with the turnout.  “You know they’ve been over in Snowbird for a number of years and never been here.  So, with the turnout we’ve had this year, we’re hoping that this can become an annual event.”

Pastor Hill was complimentary of the Christian Veterinary Mission staff.  “These guys are absolutely amazing. I’ve never seen this done before but they’re just like a well-oiled machine in there. And the really amazing thing is they’ve never worked together before. There’s a couple of them that have done this together, but the majority of them, they’re just folks that signed up and said, ‘hey, I want to do this.’ So, this is their first experience of working together as a full team, which is unreal.”

Tammy Jackson attends Grace Community Church and was very happy with the partnership formed between the organizations and what it could mean for the animals on the Qualla Boundary.  “If people are taking better care of their animals, getting them spayed and neutered, we won’t have the population of animals that people can’t feed or take care of.”

She said that will aid Cherokee Animal Control in their mission on the Qualla Boundary.  “Anything we can do to help that tribal program, we’re willing to do and also to help the community at large.”

Shane Davis, Cherokee Animal Control program manager, spoke highly of the partnership.  “I had heard about it (Mission) before because they’ve had it in Robbinsville, and I’ve been trying to figure out how to get this here.  Tammy (Jackson), through her church, got in touch with them, and then got in touch with me.  Of course, I was excited and I was glad it was coming here.”

He added, “I can’t take any credit.  I’m just here doing what I can and Tammy made it happen.  It’s what this community needs.”

Davis said a successful and continued partnership would help reduce the animal population in the coming years and avoid entire litters being dropped off at the Cherokee Animal Shelter.

Annette Rodriguez, of Cherokee, brought four dogs to the event on Saturday to get neutered.  “I think it’s fantastic because it costs $365 to have one dog done and here it’s going to be $30.”

For more information on the Christian Veterinary Mission, visit: www.cvm.org