These walls can talk: Jared Wheatley provides a canvas

ASHEVILLE – There are quite a few walls in Asheville.

They stand amongst the tallest in western North Carolina and help form the many businesses of a seemingly ever-growing city. Asheville has also had quite a few social walls that have become more visible each year. 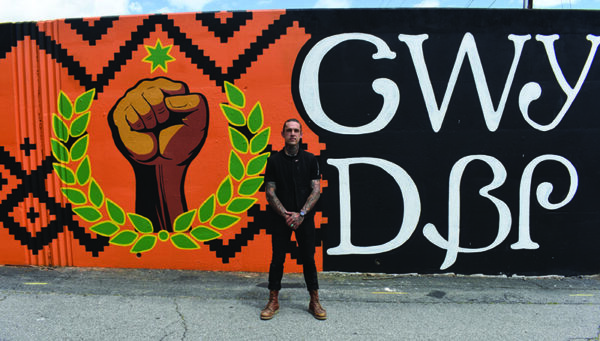 Jared Wheatley, a Cherokee Nation citizen, stands in front of one of the walls in Asheville that he has painted in connection with his Indigenous Walls Project. (JONAH LOSSIAH/One Feather photo)

Jared Wheatley, an Asheville business owner and self-described ‘Urban Indian’, looks to address these walls. He is encouraging indigenous artists and activists to reach out to him to join the initiative he has dubbed the Indigenous Walls Project.

“For me, it’s really simple. How do we get people to expand their minds and think about the ancestral land they’re standing on? Not me, but how do we get them to focus on the land. Because the end-all-be-all is land back. That’s the whole point of the movement. Land back to every nation,” said Wheatley.

“We’ve got 25,000 square feet of walls committed to us. There are enough walls for every person to come to Asheville. Every nation to come to Asheville and find space. I’ll make that commitment to anyone. If they want a voice, I’ll give them an opportunity to put it out there and amplify it in a public domain where we can encourage people to have the conversation. That’s what I’m here for. That’s my message.”

Wheatley has not always had the stage to discuss his heritage. On the contrary, some of his family members have shunned their links to the Cherokee Nation, of which Wheatley is a citizen. He was raised in a small town named Independence, Mo. and rarely had opportunities to learn about Cherokee.

“My grandfather, who grew up in Indian Country, died when I was pretty young. Around 7 or 8 years old, he died. When he passed, in our family our native heritage we didn’t want to speak about much because he lived a relatively troubled life. Struggled with alcoholism. Was kind of on-again-off-again involved in our family,” said Wheatley.

“My family’s relationship with our native heritage had always been a little bit strained because the connection we had with the Nation through my grandfather was very complex.”

He said that it wasn’t until about five years ago that this started to change for himself. He started reading his family history. The stories he was digging through were compiled by his great uncle in the 1990s.

“He took some years, actually, and wrote our history. From prior to even the Trail of Tears. At that point, he distributed it to our family. But our family once again not being what I would call educated – struggles to read, struggles to write – a lot of our family didn’t even read what he had put together. So, it sat dormant for decades.”

These papers helped center Wheatley. He felt that he finally understood more about his grandfather. How he suffered through boarding school. Wheatley read the stories that formed his heritage dating back to the Removal. Now, he just wants to make those ancestors proud.

“Whether or not I will make my grandpa happy. That’s what I spend my time thinking about. Because I don’t have a deep connection with the Nation. With any nation.”

Wheatley was the first of his family to go into higher education, earning degrees from Asheville–Buncombe Technical Community College and Western Carolina University.

Wheatley moved to Asheville in 2009 following four years of service in the United States Air Force. He enlisted directly after high school and was stationed in Anchorage, Alaska.

“I had met a young lady who I liked quite a bit. There’s a love story involved, and she had always wanted to live in Asheville. Well, two weeks after we moved to Asheville, we found out we were pregnant with our first child.”

Wheatley had two children, Alexis and Ezekiel. Though the relationship with their mother did not work long term, he stayed in Asheville. After getting a bachelor’s degree in construction management and a master’s degree in economic development, he began to make a name for himself in town. He was the project manager for the New Belgium Brewery in Asheville, which was a $52 million project. He said that’s what many people began to know him for.

Wheatley continued to develop his connections and gain footing, eventually to the point where he was able to start his own businesses in 2017. Now, he owns WTAPS Construction and the clothing line Épatage Workwear. He also has a podcast called The Outsiders Podcast and stays busy in other fields. This is all to go along with the Indigenous Walls Project.

“I’m keenly aware of how privileged I am. Most of these walls we’re getting are from people that I’ve done a pretty significant amount of business with. I used the capitalist system to amplify the voices.”

He said this stage is something that is very new for him and that he is still learning how to use it.

“It’s been great to all of a sudden have a voice as an Indian. It’s never happened before in my whole life until the last month. So, I’m growing into that voice as the conversation moves forward. Being provided a platform, what I most want people to know is that I have an isolated experience. That indigenous people are as diverse as humanity itself … because of that, I can’t represent everyone. I can only represent myself and my experiences.”

Wheatley makes it clear that he does not see himself as an artist. He wanted to keep his design manageable and direct. He says that the project is not about him, and he only produced his own messages because he felt he had to.

“When I started the project and started looking for artists, the first thing that I met was resistance from artists. They were concerned that maybe I was trying to take advantage of them in some way. They didn’t know necessarily my culture and my heritage. They needed more from me.”

He said he hopes to build this platform for everyone else and to help shift the day-to-day conversation in Asheville. He wants to make being Indian something to be proud of for his kids and future generations.

Wheatley and his oldest child, Alexis, have started the process of learning more about the Cherokee language and culture. He admitted that with his schedule and ability, he will only do his best to learn the language but doesn’t have high hopes for fluency. He is very confident in Alexis, who is 12 years old, stating that he believes they could be fluent if they put their mind to it. He also hopes to continue to study and become involved in the community he never had when he was a kid.

“I’ll be going back to Tahlequah at least annually now. To meet with my great uncle while he’s alive and to meet his community. And to meet the folks within the reservation he maintains connection with. To start building a bridge back west from here.”

Wheatley is hopeful that there are artists and leaders from the Eastern Band of Cherokee Indians (EBCI) that step up to the challenge. He hasn’t had any takers at this time.

“What’s essential is that any indigenous artist is welcome on the walls. They can contact me directly. We need more Eastern Band representation. That’s very important to me. We intend to have six nations by the end of the summer represented. It would be a shame if the Eastern Band is not one of them.”