“Even As We Breathe: A Novel” was announced as the winner of this award by The Western North Carolina Historical Association on Dec. 3. The honor has been given annually since 1955, and now comes with a $2,500 prize and a trophy. 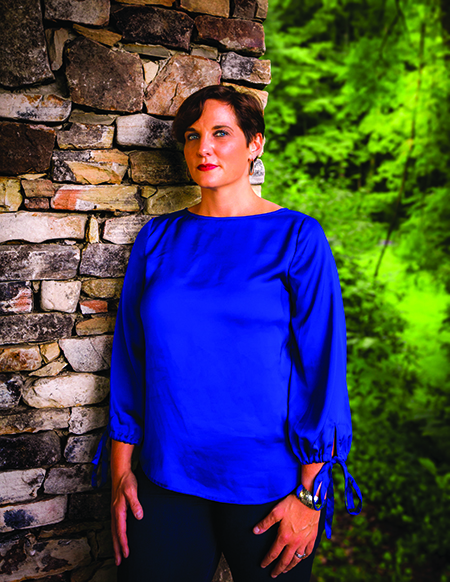 “Even As We Breathe: A Novel”, written by Annette Clapsaddle, a member of the Eastern Band of Cherokee Indians, was announced as the winner of the Thomas Wolfe Memorial Literary award by The Western North Carolina Historical Association on Dec. 3. The honor has been given annually since 1955, and now comes with a $2,500 prize and a trophy. (Photo by Madison Hye Long)

“I was grateful because it’s a nomination process. So, it’s just really nice to know people are nominating the book, and it’s not the legwork that I have to do. Someone else would pick that up and champion it. That’s the most exciting part about it to me, that people took the time to champion the book for the award,” said Clapsaddle.

Clapsaddle had her book published on Sept. 8 of 2020 and has garnered a lot of attention in the region. “Even as We Breathe” was also recently selected by the North Carolina Humanities Council to be part of its ‘North Carolina Reads’ book club, which will get the novel in the hands of a broad audience across the state.

“The staying power for ‘Even As We Breathe’ has been very welcome. Especially because I did release during COVID. So, the ability for it to still hang around, to still get invitations to speak places and see that it isn’t relevant to just Cherokee or Asheville or Western North Carolina but different places across the country. That kind of hints to me that it might be in the running for something like Thomas Wolfe or some other literary prizes.”

Clapsaddle said that the publication cycle has been exciting but also daunting. With this being her first published novel, she’s had to find her footing in two worlds – initial release in a lockdown, and now exploring the country on a proper press run.

“It’s been more travel of course than before because everything was online with COVID before. Then, really trying to focus and find that time for the next book. Because while I try to enjoy every moment of this one, eventually I have to get another one out. I have to be a little more greedy of my writing time, really starting now.”

On top of the chaos of releasing a popular novel, Clapsaddle’s occupation was hit by the pandemic as hard as anybody. She is a full-time English teacher at Swain High School. With school fully returning to in-person classes this semester, that was yet another thing to juggle.

“I was gone almost every weekend in November, and I purposefully didn’t schedule things in December. It got exhausting because again I have a full-time job and a family. But I don’t want to give up any opportunity that comes about.”

She said that she has had a lot of fun discussing the process with her students, as well as how they talk about the book’s success with her.

“It’s always funny to see their reaction because you’re going to get honest reactions. It’s everything that ranges between students coming in to say, ‘my mom said you wrote a book’ to them wanting to read the book. They got excited about the award. I was actually surprised how many students knew about the award when I came back to school the day after it was announced. That was nice.”

Now that she is traveling the country attending events, has won awards, and is working on another book, does she think of herself more as a writer or a teacher?

“That’s a trick question,” Clapsaddle said with a chuckle.

“I definitely think of myself as both. It really does depend on context. I guess in my every day, ‘teacher’ would come before ‘writer’. It certainly takes up way more of my time than being a writer does. But they also go hand in hand so well. I’ve learned so much from my process as a writer that I take into the classroom, and so much from the classroom that I put into my writing that they’re kind of one and the same. Because the book is out, I am very clearly a writer. I don’t know that I was always upfront about that describing myself before.”

Clapsaddle said that she hopes more than anything that the momentum for indigenous writers carries on. She said awards like the Thomas Wolfe and recognition from NC Humanities can help with visibility for her peers.

“Especially in North Carolina. We’re the only federally recognized Tribe. To finally have that literature as available and as accessible as other literature from across the state is really important. Because that leads to other discussions. Rarely will I go to an event and just talk about the content of the book. People ask so many questions and I get the opportunity to talk about our sovereignty, our economic development, and our health care. It opens up opportunities to talk about all of those things and then also to connect to other aspects of our culture and the work that other people are doing.”

She said that this mindset was a big influence for how she landed on her focus for her next project. Clapsaddle said that her agent recently read the first 150 pages of the next novel and they are moving forward.

She said that using the voice she has to convey a modern perspective is something she is really excited about.

“One of the things I always want to push back against is the stereotype that native people and native communities are all in past tense. So many of the narratives about Cherokee people have been the Trail of Tears era or pre-contact or early contact. Even As We Breathe was a little bit later than that. But I’m excited about writing a contemporary novel that is a reminder of how we function today.”

“I still believe in giving people other names when at all possible. To connect them with more expertise, I’m not an expert on everything. But I do know who the experts are. I try to do that. It does become exhausting being the first point of contact for some people. But again, I’ve learned to say no. It depends on what their motive is. I try to help when I can. But I do think it’s important for me to say I’m not a voice for the whole Tribe and you should hear these other voices because they’re incredible.”

As the book and her career has grown, there have been more opportunities to discuss Cherokee culture. Given the nature of curious minds, Clapsaddle said that she has to be patient for anyone that’s interested in Cherokee.

“This is why I’m always a teacher too. Because you never know when you get in a conversation with someone who’s interested where you’re going to have to start. You kind of take baby steps to see what their level of understanding is … I’m glad people want to know, and they have questions and they’re willing to listen. So, wherever they’re starting in their understanding, I’m happy to meet them there as long as they’re willing to listen.”

As well as working on her next book, Clapsaddle said that the success of the book as opened different avenues in writing and publishing. She said that another focus of hers is to provide opportunities to others in the area.

“I’ve had some casual conversations with some folks about publications and have been able to connect some people. I’m an editor for a series that my publisher is doing called ‘Appalachian Future Series’ which highlights diverse voices in Appalachia. So, I am able to connect folks with publishing opportunities. Long range, I signed a contract to do an anthology with them. I’m kind of laying the groundwork for that.”

She said that she is humbled by receiving the Thomas Wolfe Memorial Literary Award and for the support she has received over the last few years.

“I’m extremely grateful for it. With the other finalist and those that have been recognized in the past are voices that I really respect. More so than giving me name recognition I’m glad that it is recognizing an Eastern Band story for the first time ever. Also, I will say, the winner last year was collected Eastern Band stories (“Eastern Cherokee Stories” by Sandra Muse Isaacs). It was not for a novel, but’s actually really heartening to see them recognize Cherokee work two years in a row. It’s not just like a nod one year to native culture. It’s really recognizing that we’re here to stay in the literary world.”