An advocacy organization dedicated to Native American rights and sovereignty held its 99th Annual Members Meeting at the Museum of the Cherokee Indian on the afternoon of Saturday, Dec. 4.  The Association on American Indian Affairs held its meeting, hosted by the Eastern Band of Cherokee Indians (EBCI), virtually from the Museum’s Ken Blankenship Education and Research Center. 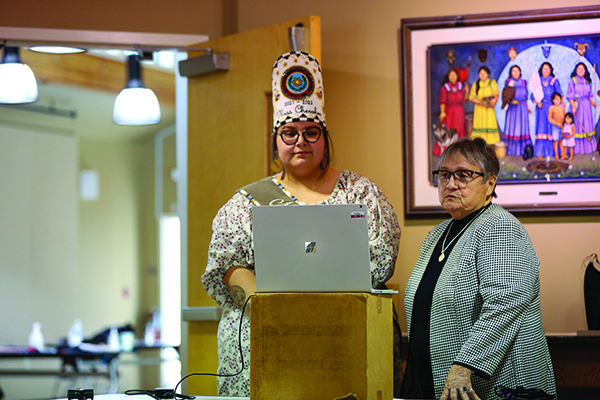 Having started in 1922, the Association is the oldest running non-profit organization in Indian Country with the mission “to lead the grassroots fight to protect Native American cultural sovereignty”.

“We were founded in 1922 to change the destructive federal policy of assimilation and allotment and boarding schools towards self-sufficiency, self-determination, and sovereignty and work at a grassroots level to raise those voices to a national level and change policy and law,” said Shannon O’Loughlin, Association on American Indian Affairs chief executive officer, a member of the Choctaw Nation (Okla.).

O’Loughlin added, “We tend to look at our programs as ones that support cultural sovereignty – the things that make us who we are as Native people.  Those include issues of repatriation, the return of cultural heritage items that have been stolen – not just from museums or federal agencies, but they’re around the world and also in private collections such as auction houses around the world.  We work on protecting other items that may not be necessarily thought of as items that are given back under repatriation like language tapes, recordings, documents, and other things that are our primary information that has been removed from us so that we are separated from the narratives that have been defining us.” 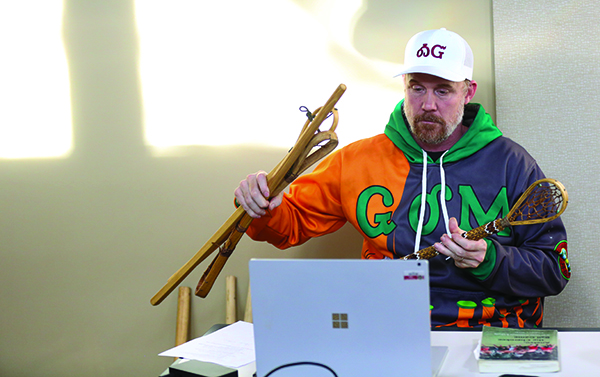 Caleb Hickman, a Cherokee Nation citizen originally from Oklahoma who is the supervisory fish and wildlife biologist for EBCI Natural Resources, is a member of the local Hummingbirds stickball team. Here, he is shown discussing the game of stickball and its history.

Other issues the Association is working on include protection of sacred Native sites, intergenerational and community healing, continued work on the Indian Child Welfare Act which was started by work done by the organization, as well as running the oldest college scholarship program for Native students.

O’Loughlin said the Association has over 1,000 members, both Native and non-Native.  “That gives us a voice that goes beyond just the tribal voice.  It’s the general public supporting our mission, vision, and goals.”

Kimberly Smith, an EBCI tribal member, serves as the Association’s public affairs and outreach coordinator.  “I am fully honored to be a part of the host for the celebration of a national organization that has been the backbone of Indian Country for 100 years.  To be able to work with them is truly an honor to have the ability to weave my story and my people’s story into the Association’s 100 years.  It’s an opportunity that I want to make sure I give enough time and energy and effort to because this is a piece of a ripple effect that is not just a skipping stone.  This is a boulder.  This is an opportunity for representation from Cherokee people to have a national impact in Indian Country.”

“We are a matriarchal, matrilineal society,” Beloved Woman Monteith told the audience. 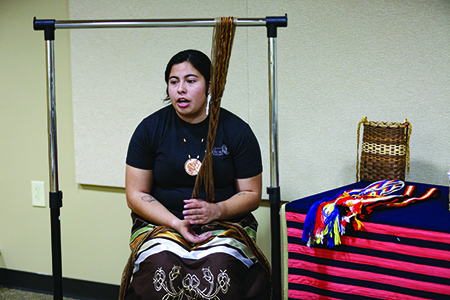 Nola Teesatuskie, an Atsila Anotasgi cultural specialist at the Museum of the Cherokee Indian, discusses the Cherokee art of fingerweaving during the event.

She spoke about the history and responsibilities of a Beloved Woman.  “It is the highest honor that can be bestowed upon a Cherokee woman.  It can be for various reasons and for whatever is going on within a woman’s life.  Traditionally, it was awarded to those women who were warriors that became too old to go to battle.”

Maney noted, “Our women were awesome back in the day, and we held a lot of status.  The clanships that our Tribe goes by come through your mother’s line, and everything got kind of flipped after contact.  But, whenever a couple got married the husband would actually marry into the wife’s family and she would own the property, the kids were considered hers, and he would actually take on her clan after their marriage.  There were a lot of things to which our women were held to a high status during that time.”

She added, “Oftentimes, when it came to debates or council the women were the ones who had the final say.”

For more information on the Association on American Indian Affairs, visit: www.Indian-Affairs.org or call (240) 314-7155.