Seven members of the Eastern Band of Cherokee Indians (EBCI) have been selected to participate in the 2022 Remember the Removal Ride which will retrace the northern route of the Trail of Tears from New Echota, Ga. to Tahlequah, Okla.  Justin Lambert, Bubba Aguilera, Emra Arkansas, Laura Blythe, Levi West, Ethan Ledford, and former EBCI Vice Chief Larry Blythe will represent the EBCI during the ride in June.

Lambert, age 34 from the Birdtown Community, commented, “I’m hoping to gain a lot of knowledge from what our ancestors went through so I can show our young people what to do. What inspired me was my sister, Ahli-sha Stephens, and my brother-in-law, Jake Stephens. They inspired me and said, ‘You need to do it!’ So, I was like, ‘Alright, let’s try it.’ Those two really inspired me to do this.” 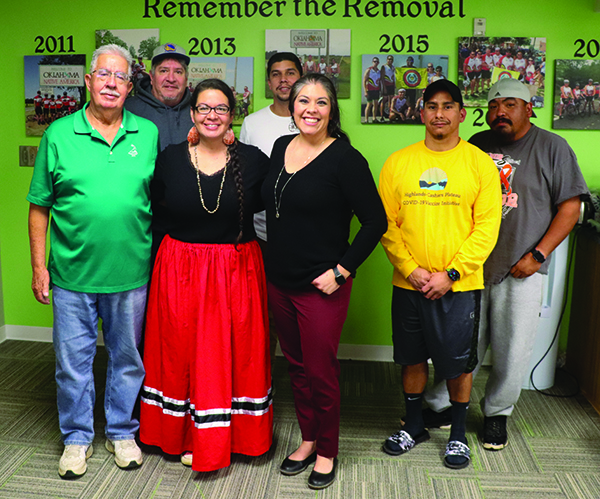 Seven members of the Eastern Band of Cherokee Indians (EBCI) have been selected to participate in the 2022 Remember the Removal Ride which will retrace the northern route of the Trail of Tears from New Echota, Ga. to Tahlequah, Okla. They are shown, left to right, in the Cherokee Choices office on the evening of Thursday, Dec. 2 including – former Vice Chief Larry Blythe, Ethan Ledford, Laura Blythe, Levi West, Emra Arkansas, Bubba Aguilera, and Justin Lambert. (SCOTT MCKIE B.P./One Feather photo)

Lambert was one of four riders selected in 2020, along with Ledford, Laura Blythe, and Arkansas, that were affected when the ride was cancelled due to COVID-19.

Lambert said he is getting himself ready for this year’s ride.  “I’ve been training year-round. I’ve been ready. I need to get my stamina built up more. That’s what’s most important to me right now is my stamina. But, what I take from the classes and what we’re going to go through so I can take back to my kids and show them so they know more when they go back to school.”

Aguilera, age 32 originally from the Big Y Community and currently living in the Painttown Community, said, “I signed up for several reasons – I was wanting a challenge mentally and physically, and I’m just really looking forward to absorbing all of the knowledge throughout all the stops along the way, just to gain more about my culture, my traditions, and my family during that time of the Removal.”

Arkansas, age 39 from the Wolftown Community, noted, “I still want to have a spiritual sense of what it meant in terms of when we were preparing to leave, what we went through, what we endured, the stops along the way. Historical healing – I think that’s most important. I think that right now, especially on the brink of the pandemic, out of the pandemic, back in the pandemic, I think just the sense of staying healthy and having our communities come together so all of us can be together. The camaraderie, I think, is something that we didn’t really get to experience once we started training before COVID cut us off.”

She is ready to get the process going.  “I’m excited to get back into the swing of things and have the unity and the camaraderie and the team fellowship.”

West, age 32 from the Wolftown Community, said, “I signed up, basically, to challenge myself, to push myself not just physically but also to seek the culture. It’s part of my job and I think it’s great that I get to work with that and learn about the culture as a job. But, I felt like this would really help expand my knowledge of the history of what we went through as a people. So, that was why I put in for it and it’s basically what I want to get out of it.”

He is excited about the cultural learning as well.  “I want to learn everything I can from now until then in-depth. I know it happened. I know the Removal happened and a very vague history of it. But, I want to know where things happened, if my family was there, any kind of ties I have to it. I’m just really interested in that.”

Ledford, age 56 from the Birdtown Community, said his father, the late Vice Chief Bill Ledford, was a big proponent of cultural teachings.  “He traveled many times out to Oklahoma and always wanted culture and Cherokee language to continue to be taught in high school and beyond.  My grandfather’s name was McKinley Ross, and he actually went out to Oklahoma as part of the delegation that brought back the eternal flame…I just want to retrace their steps.”

After having the 2020 ride cancelled, Ledford said he is getting motivated and is set to start training.  “I’m hoping that with it impending that I’ll just kick myself in the butt and get going again. I was looking forward to it this whole time. But looking forward to it and actually prepping myself for it are two totally different things.”

This year’s ride has a unique father-daughter aspect with Larry Blythe, age 67 from the Birdtown Community, and his daughter, Laura, age 39 from the Painttown Community.

Laura noted, “I’m not quite sure what to expect, but it’s what I’ve been waiting for. Just to learn the history and get deeper into the Removal, learn our family history, what connection we may have to it here and even, possibly, did some of our family make the trip out. And, if so, what happened? So, just all of it.  I don’t really know how to describe it. It’s kind of weird that it’s rolled back around again, but I think it’ll be great and I’m really looking forward to it.”

Larry said, “I got on a bike last summer for the first time in 40 years. Years ago, I loved to ride in college. So, I just got sort of hooked on it again. And, of course, Laura encouraged me and Emra and some of the previous riders.  I ride an e-bike. That’s what I started on. You can’t ride the e-bike to Oklahoma. But, they’re like, ‘If you can do what we’re doing, even on an e-bike, you can make it to Oklahoma’. So, it was sort of a thing to challenge myself.”

He added, “I think getting out of it is the cultural piece for me. I’d been in tribal office a long time and you think you know a lot about a lot – you don’t. So, I’m hoping to gain more knowledge and pass it on to my grandkids and my own children – some of them, I don’t know if they’ve ever been to Oklahoma. So, to experience what those folks went through and the terrain, I think that’s going to give me a good mental picture. Then, of course the stops and where they would’ve camped or had meetings or whatever along the way. So, it’s a combination of that.”

Both are looking forward to sharing the event.

“To be able to share it with my father is something I didn’t expect,” said Laura.  “It’s kind of mind-blowing. But, I’m looking forward to it. I think that to get to experience this with somebody I’ve always looked up to, he’s my hero in life, he’s my mentor, and he’s done great things in the community so I strive to kind of help the community the way he did throughout his life. I think it’ll just be great for our family in general for us to go through this – the bonding experience that we can get knowing that we can make it through. It’s good to know that we have somebody there that will be there no matter what to help with any strife that we may come across or any victories that we may see along the way as well. I’m excited. I’m glad he’s here with me.”

Larry said, “She’s the one that got me on the bike. Of course, she’s always been one of my biggest supporters and sometimes one of my biggest critics. If we make it to Oklahoma without killing each other, we’re going to do very well. It’s really cool to think about that – a father and daughter. Certainly, 180 years ago families, fathers and daughters and mothers were together in different circumstance, but still having to rely on each other, encourage each other, pray with each other – all those things that we still have to do today as a people and families, too, to continue to be strong.”

The riders will embark on their journey from New Echota, Ga. in early June and will arrive in Tahlequah, Okla. several weeks later.  The One Feather will publish their full itinerary following the official send-off event from Kituwah Mound which will be held several days before they start.