‘A New Beginning’: Cherokee, USFW Service work together to preserve the land, relationship

Seven miles outside town, in the fertile valley that runs alongside the Tuckasegee River, lies the heart of the Eastern Band of Cherokee Indians. Remnants of a ceremonial mound more than a thousand years old are all that remain of “the Mother Town,” or Kituwah.

The Cherokee, whose homeland once covered the Southern Appalachian mountains, consider Kituwah hallowed ground. Today, fittingly, it is also a conservation centerpiece for scientists with the tribe, the U.S. Fish and Wildlife Service (Service), and other agencies. 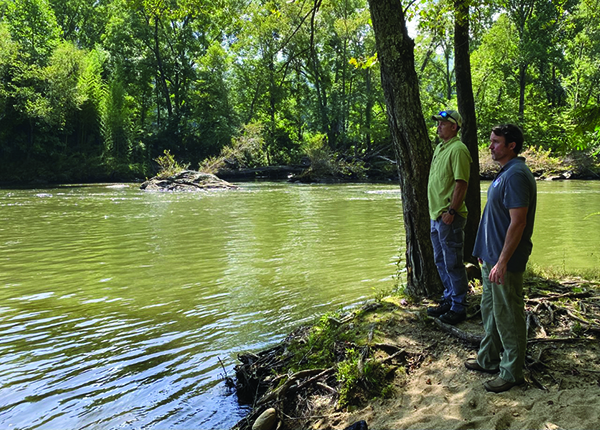 Caleb Hickman and Michael Lavoie, wildlife officials with the Eastern Band of the Cherokee Indians, stand alongside the Tuckasegee River. (DAN CHAPMAN/USFWS photos)

Ecologists and biologists monitor sicklefin redhorse suckers in the Tuckasegee. They track migratory birds – indigo buntings, Carolina wrens, scarlet tanagers — streaming through the valley along the Atlantic Flyway. And they plant fields of milkweed and other pollinator bushes to nurture butterflies and bees.

Kituwah represents just a portion of the collaborative conservation work between the tribe and Fish and Wildlife. The Cherokee have received nearly $2 million in wildlife grants, and more from other programs, from the Service the last 20 years for a slew of wildlife and habitat improvement projects. A slug of federal money could head the tribe’s way if Congress approves the Recovering America’s Wildlife Act. And the Biden administration’s push to “conserve, connect and restore” 30 percent of the nation’s lands and waters by 2030, known as the America the Beautiful initiative, offers numerous conservation opportunities for the tribe.

The Service-Cherokee relationship appears on track. That wasn’t always the case.

“There’s a new beginning, in some ways, with this administration,” says Mike Lavoie, the tribe’s natural resources manager. “We’re hopeful, in the long term, that we’ll move forward in a positive direction.”

Congress, in 1830, passed the Indian Removal Act which led to the expulsion of 3,500 Cherokee from western North Carolina. Several hundred Native Americans, though, evaded capture by slipping deeper into the mountains or coming to agreements with state officials. They were joined by other Cherokee and, within a decade, had bought back 50,000 acres of their own land. Today, the Eastern Band of Cherokee Indians count 16,093 enrolled tribal members and a thriving tourism- and casino-based economy in the shadows of the Great Smoky Mountains National Park.

Like most Native Americans the Cherokee have had a tempestuous relationship with the federal government. A sovereign nation, with a deep love and respect for the natural world, their differences extend to conservation. They oppose construction of two Great Plains oil pipelines that cross tribal lands pushed by the Trump administration in 2017. They were outraged when the White House that same year reduced the size of the sacred Bears Ears National Monument and opened it up for oil and gas exploration. Federal edicts lessening protections for gray wolves and migratory birds further inflamed Native Americans.

The Biden administration halted one pipeline. It returned Bears Ears, and another Utah monument, to its original size. Industries will, once again, be required to more fully protect migratory birds. And, in September, the Service announced it will review whether to reinstate federal protections for the gray wolf.

There are subtler actions, and symbolic ones too, taken by the Service and the U.S. Department of the Interior. Service biologists consult more frequently with tribal counterparts on Endangered Species Act, climate change, and wildlife plans. Leopoldo Miranda-Castro, the Service’s regional director in the South Atlantic, Gulf and Mississippi Basin regions, met virtually this year with the Eastern Band’s Principal Chief, Richard Sneed, as well as with other Southeastern tribal officials. And nothing sent a stronger signal of cooperation and respect than the nomination of Deb Haaland, a member of the Laguna Pueblo tribe, as Interior secretary.

“For me, what’s most important, is that we have been able to start building a good relationship based on trust,” Miranda-Castro says. “I see our nation-to-nation relationship blossoming into a great partnership. And it all starts and ends with people.”

Lavoie credits Miranda-Castro, and the Service overall, with a greater willingness to work with the tribe and to uphold its “trust responsibility” which requires the agency to seriously consider how its actions impact the Cherokee. He adds, “We need the Service to be more proactive and come to our lands to understand our story and our needs.”

Lavoie and Caleb Hickman, the tribe’s wildlife ecologist, stand along the banks of the Tuckasegee, at the edge of Kituwah, where the sicklefin redhorse once teemed. The suckers — “the salmon of the South,”  Lavoie says – filled Cherokee bellies and represent, today, important cultural and recreational reminders of a time gone by. Endemic to but a handful of Appalachian counties, the fish that grow up to two feet in length succumbed over the centuries to erosion, pollution, dams, and predators.

In 2005, the Service designated the redhorse (ugidatli, or ᎤᎩᏓᏟ, in Cherokee) a candidate for the endangered species list. A decade later, the Service, the tribe and other agencies signed a Candidate Conservation Agreement, a voluntary pact to improve the fish’s habitat, and prospects for survival, with hopes of avoiding the more stringent restrictions of the ESA. Scientists catch sicklefins from the Tuckasegee, Oconaluftee and Little Tennessee rivers and squeeze eggs from their bellies. The eggs are then hatched at the Warm Springs (Ga.) National Fish Hatchery before returning as fingerlings to the region’s waters. The Service and the tribe routinely electro-fish the rivers, including the Tuckasegee, to determine how their propagation efforts are faring. The ultimate goal is to return a healthy population of sicklefins to the Oconaluftee which runs through the heart of the Cherokee nation.

“The sicklefin project is a good example of the partnership, or co-production, between the tribe and the Service,” Hickman says as a Canadian goose shoots upstream.

Bryan Thompkins, a biologist in the Service’s Asheville field office, gets high marks from Hickman and others for collaboration with the tribe.

“The sicklefin was the first big project I worked on where everybody was in total agreement,” he says. “So far, it’s definitely been a big success. But the biggest thing, to me, has been the relationship-building, bringing all the stakeholders together and working towards a common  goal.”

Sicklefin weren’t the first fish to benefit from the relationship. In 2003, the Cherokee received  $250,000 from the Service to fix up their rundown hatchery and buy ATVs to stock trout in hard-to-reach streams. The tribe has since won a number of tribal wildlife grants with the goal, mainly, of identifying the 57,000-acre reservation’s natural resources and developing plans to bolster habitats for plants, fish, birds and other animals. And, with trees covering 85 percent of the Qualla Boundary, the denizens of the forest receive special consideration.

“There’s a big need to collect better information about what biodiversity looks like on our landscape, and what areas should be better conserved,” Lavoie says. 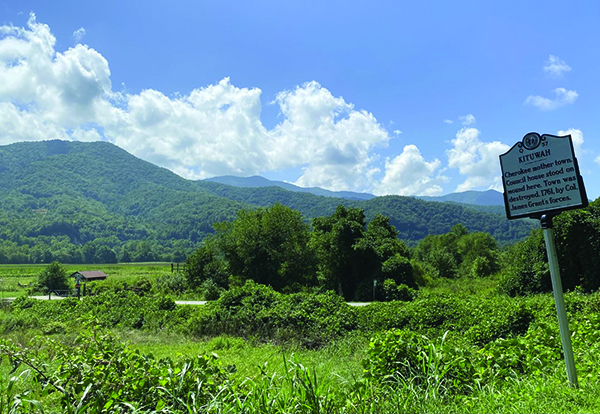 Kituwah, or the Mother Town of the Cherokee, sits in a lush valley between Cherokee and Bryson City and along the Tuckasegee River.

He and Hickman pull up to a salt shed perched behind a chain-link fence in the Birdtown community. Nothing’s out of the ordinary, except for a long pole affixed to the fence with an acoustic detection system that picks up the high-frequency chirps of bats flying by. Twelve bat species have been documented within the Qualla Boundary, including federally-endangered Indiana and gray bats, and threatened northern long-eared bats. All are succumbing to the deadly white-nose syndrome, a fungal disease that has decimated bat populations across the country. The tribe has monitored bats since 2004.

“There’s a lot of work around bats that’s related to development on tribal lands,” Lavoie says. “It’s complicated and controversial on the reservation. Tribal members have a tough time building homes in areas where bats are known to roost in the summer.”

Under ESA rules, trees may not be cut if threatened or endangered bats live in them, unless the Service signs off. The process can be time-consuming. The Service and the tribe are working on a plan to allow the “incidental take” of some bats without jeopardizing their existence.

“This is one of my focal points with the tribe. It’s gone on long enough and it really does cause a lot of heartache,” Thompson says. “Every time they want to build a house or something they have to come to us for a consultation. But I want to work this out so that they can make most of the decisions themselves.”

He expects a final resolution this winter. The dispute, though, underscores the at-times prickly relationship between the Service and the Cherokee. Major conservation actions unfolding in Washington, though, could go a long way toward ameliorating Service-Cherokee relations.

The U.S. House passed, and the Senate is considering, legislation to spend $1.3 billion each year on the long-term health of the nation’s fish, wildlife, and habitats. The Recovering America’s Wildlife Act would dedicate nearly $100 million annually to tribes. Julie Thorstenson, executive director of the Native American Fish and Wildlife Society, says the funding will “be a game-changer in Indian Country and allow tribes to really build that capacity and focus on species of greatest concern that are culturally important.”

The Biden administration is also hashing out details of its America the Beautiful initiative to conserve 30 percent of the nation’s lands and waters. Ten percent of the Cherokee reservation – 6,000 acres – is already designated a “tribal reserve.” Hickman says the tribe protects the land, bisected by the Blue Ridge Parkway, for hunting, fishing, ceremonies, and traditional plant harvests. Yet more can be done.

“Connectivity across the landscape is an important issue here,” he says. “We want to grab the reins of 30-by-30, and wave the flag. After all, we have thousands of years of experience with conservation, fire, forest management, and more. Who better to lead the charge than the Cherokee?”