The year was 1972. A group of 45 public television stations, primarily from the western United States, were brought together with the help of a Corporation for Public Broadcasting (CPB) grant for a three-day meeting at historic Wingspread, the Lloyd Wright House at the Johnson Foundation in Racine, Wisconsin. Frank Blythe (Eastern Cherokee/Sisseton-Wahpeton Dakota) was one of the participants. He was one of just six Native attendees who were working in public television at the time. 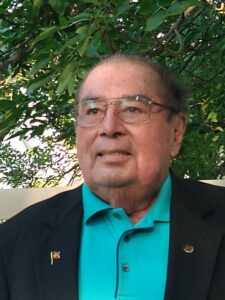 “The purpose [of the gathering] was to see if it was feasible to put together an organization that could serve Native American producers and serve public television with Native programs,” said Blythe, whose professional experience at that time was in operation management at KAET-TV, a public television station licensed at Arizona State University in Tempe.

“How we were going to do that, we weren’t sure, but that was the primary purpose of how it got started — the stations backed us up and they all gave us some seed money to get organized and get started and we went from there,” said Blythe. “CPB came on board in 1976 and helped with funding, and that’s how we got started. This is [also] when we started the organization at Nebraska Public Media in Lincoln, Nebraska.” 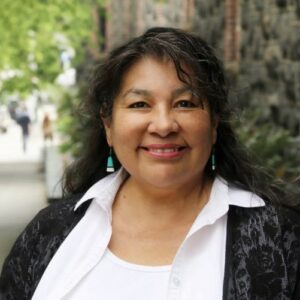 In 1976, Blythe was hired as the first executive director of NAPBC, which after some years was renamed Native American Public Telecommunications and, finally, Vision Maker Media in 2013. “Our mission [back then] was to create an organization that served Native American populations and brought their films and media to the public,” said Blythe, who led the organization until 2006. “The outlet we used was PBS because we were funded by CPB. We were expected to produce materials that were distributed to PBS.”

“The original goal was to show the American public that Native peoples exist; they have survived and they continue to serve in their communities and work with their individual communities within their states… I feel we gave a positive view of some of them although some had sorrowful histories from the past,” said Blythe. “Those stories were also presented and created discussion and story making that would have not otherwise been seen in public television.”

Documentary filmmaker Sydney Bean (Flandreau Santee Sioux) one of Frank’s longest standing friends from early childhood and affiliated with Blythe through their mutual television work for many years and as a board member for NAPBC and, later, for Vision Maker Media, has watched the organization grow and flourish over the years.

“Both of us had some early experience in television, particularly focusing on Native American stories and Native issues,” said Bean. “This was back in the early 70s, a time when Native storytelling was really emerging around the American civil rights movement. It was creating a lot of stories that were being documented through media. There was a lot of social change going on that was being documented through media all over the country.”

“We came together through birth around our commitment and responsibility to reclaim our identity as the original people of this land and to continue to tell the original stories in the different context of time,” said Bean. “The challenge of that is to get those stories distributed and incorporated into the institutions of this country —the school systems, health networks and all the major institutions — so that we are truly understood and are able to function in a fully equitable way within our own country.”

In the following years, Blythe made big moves for Native Americans in public broadcasting. In 1990, NAPBC launched a $500,000 annual television program fund, now known as Vision Maker Media’s Public Media Fund, for Native producers to produce stories and Native productions to be funded with the support from CPB. In 1994, under Blythe’s leadership, NAPBC began American Indian Radio on Satellite (AIROS), which launched The Native Radio Network and Native America Calling as a first daily all-Native live radio talk show and are still in operation. As the years went by, NAPBC eventually changed its name to Native American Public Telecommunications (NAPT) in 1995; and later, when Shirley Sneve (Rosebud Sioux), came on board in 2004 as the organization’s second executive director, NAPT’s name was changed to Vision Maker Media.

Fast forward to 2020. After the departure of Sneve in 2019, a national search was launched to find her replacement. Francene Blythe-Lewis (Diné, Sisseton Wahpeton and Eastern Cherokee), was hired as Vision Maker Media’s new executive director in 2020. The daughter of Blythe, Blythe-Lewis’s extensive experience in project management, arts and culture at such nationally-renowned organizations as The National Geographic Society, The Smithsonian Institution’s Center for Folklife and Cultural Heritage and The National Museum of the American Indian, and Native Arts and Cultures Foundation, made her the perfect choice for the job.

“Francene has established herself; she had the skill set and background and is in invested in her craft,” said Joely Proudfit (Luiseño), Vision Maker Media board chair. “Frank had started the organization and now it has come full circle with Francene.”

Blythe-Lewis grew up in Lincoln where she attended and graduated from Lincoln Southeast High School. After high school she remained in the state, graduating from the University of Nebraska in Omaha. She served on the Lincoln Housing Authority Board and as an AmeriCorps worker in a social service nonprofit agency. During her early career, she started her cultural education efforts by presenting workshops, titled “Unlearning Indian Stereotypes,” in the Lincoln public school system.

“Fran[cene] worked for me at one time because I also spent 10 years living in Lincoln,” says Bean. “Frank was a chairman on my board and Fran[cene] ran one of my largest programs when she was in college. So, we have a long close committed relationship to the same values and same principles and the critical need for the telling and hearing and educating and training around the Native story.”

Blythe-Lewis remembers going to conferences with her father over the years and meeting many of his Native media colleagues and friends, so she received an early, informal introduction to his work in Native media making. “I remember the first series about contemporary Native artists that my dad produced and I remember it opened American eyes that there are Native Americans still alive and doing amazing stuff!,” she said. “As a young Native person back then, I only saw the traditional aspects of my Native cultures and living ordinary lives like going to work and feeding family. That show of four contemporary artists showed me Native people outside my own perspective and experience. I, too, was amazed, wowed and impressed.”

Vision Maker Media has been observing its 45th anniversary in 2021. The organization has a lot to celebrate. “What began as a film archive has transformed into the nation’s public-media leader in content by and about America’s first people — Native Americans and Alaska Natives — for public broadcasting,” says Blythe-Lewis.

The archive of award-winning programs and documentaries is a testament to the importance and relevance of Vision Maker Media’s work.”

“As we seek to include more diverse representation of people and ideas within our system, Vision Maker Media’s importance will continue to rise,” said Leonard. “Nebraska Public Media has been proud to be the physical home of Vision Maker Media as well as a partner in bringing diverse voices and stories to public media for the past 45 years.”

The great Oglala Chief Crazy Horse said, ‘A people without a history, is like wind on the buffalo grass,’” says Ron Hull, first treasurer of NAPBC and Nebraska Public Media senior advisor. “As a charter member of the initial NAPBC I was intrigued by the potential of creating a new media center dedicated to telling the stories of Native American history and culture produced by Native Americans. For 45 years Vision Maker Media has been capturing this history for all audiences.”