FOOTBALL: Braves forge a big win against the Ironmen

The Cherokee Braves (6-5) got a big win in the first round of the NCHSAA 1A state playoffs over the Cherryville Ironmen.  With 363 total yards, 332 of those on the ground, the Braves defeated the Ironmen 36-15 on a chilly evening at Ray Kinsland Stadium on Friday, Nov. 5.

Mike Driver, Braves running back, led Cherokee with 94 yards on 11 carries.  He was named the Cherokee One Feather Player of the Game as decided upon by the WNCC 104.1 FM broadcast crew who also gave an honorable mention shout-out to the Braves’ offensive line. 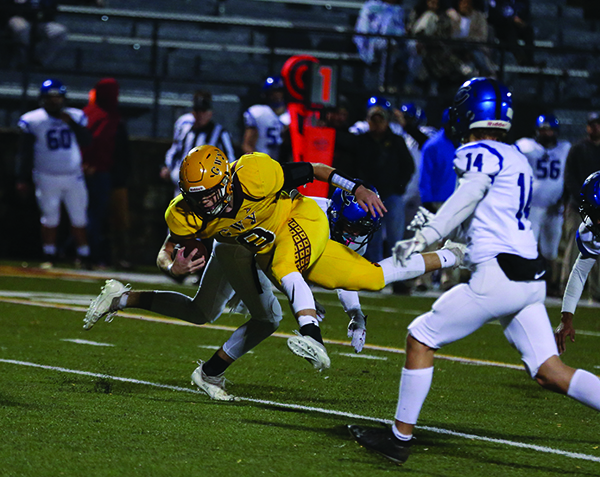 Cherokee’s Chase Calhoun (#8) dives for extra yardage on a run in the first half of a game against the Cherryville Ironmen in the first round of the NCHSAA 1A state playoffs at Ray Kinsland Stadium on the chilly evening of Friday, Nov. 5. (SCOTT MCKIE B.P./One Feather photo)

Two other major rushers for the Braves on the night were Malakai Fourkiller-Raby with 4 carries for 84 yards and 1 TD and Don Bradley who had 9 carries for 60 yards and 1 TD.  Bradley also completed 3 of 7 passes for 31 yards, 2 TDs, and 1 INT.

vs Cherryville, 1st Round playoff, November 5 – Cherokee One Feather (smugmug.com)

Following holding Cherryville to a three-and-out to start the game, Cherokee scored on its first possession – a 7-play, 73-yard drive.  Fourkiller-Raby had a 53-yard run in this drive to set up a 1-yard touchdown run by Bradley.  Bradley added the two-point conversion, and the Braves led 8-0 midway through the first quarter.

Cherryville had what appeared to be another three-and-out on their next possession.  As they lined up to punt, they attempted a fake which Cherokee thwarted and took over on downs at the Ironmen 40-yard line.  Several plays later, Cameron Lane-Sampson caught a 13-yard touchdown pass from Bradley.  Driver ran for the two-point conversion to make it Cherokee 16-0 with 1:30 left in the quarter.

Cherryville’s next possession ended in a fumble which was recovered by Reed at the Cherryville 27-yard line.  Three plays later, Cherokee scored as Chase Calhoun ran it in from 2 yards out.  The two-point try failed, and Cherokee led 22-0 early in the second quarter.

It was another three-and-out for the Ironmen, and the Braves took over with good field position at their own 41-yard line.  On first down, Cherokee fumbled which was recovered by Cherryville.  Two plays later, though, the Braves got the ball back as the Ironmen would put the ball on the ground, and the fumble was recovered by Cherokee’s Luke Smith.

Six plays later, Driver caught a 10-yard touchdown pass from Bradley.  The two-point failed, and the Braves led 28-0 with 7:14 left in the half.

The Ironmen would get on the board on their next possession following a 6-play, 70-yard drive that culminated in a 40-yard touchdown pass from Chase Miller to Kadin Beaver.  Cherryville added the extra point to make it 28-7 at the half.  On the night, Miller completed 8 of 16 passes for 142 yards, 1 TD, and 1 INT.

The third quarter opened with both teams having to punt the ball following stalled drives.  Then, with 5:19 left in the quarter, Fourkiller-Raby ran 22 yards for a score.  Bradley ran for the two-point conversion to make it 36-7.

The Ironmen would add one more score as Miller ran for a 2-yard score in the fourth.  Miller ran for the two-point conversion to make the final score Cherokee 36 Cherryville 15.

The Braves, seeded #13 in the playoffs, travel to #4 Robbinsville in a second-round match-up on Friday, Nov. 12 at 7:30 p.m. at Big Oaks Stadium.  The Black Knights defeated Winston-Salem Prep in their first-round game 66-14.