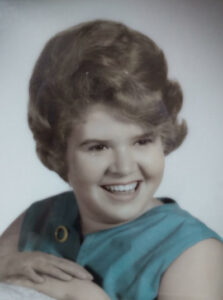 She is also survived by her siblings, John H. Gloyne (Henrietta), Jack E. Gloyne (Tootsie), and Judy G. Tiger (Mike (d.)) as well as many nieces and nephews with which she had formed special relationships. Mary was never afraid to speak up for what she believed and was always willing to help her family and neighbors, asking nothing in return. The family will miss her strength, endless support, and brutal honesty.

Mary enjoyed a successful professional career and began her work with the federal government in June 1971 when she joined the Peace Corps and served for two and a half years, teaching English at a women’s college in Kasserine, Tunisia. Upon returning to Cherokee in 1975, Wachacha was hired by the Bureau of Indian Affairs as an elementary school teacher for the Cherokee Central School system. Later she moved to the Indian Health Service working at the Cherokee Indian Hospital as a Health Educator. Wachacha was promoted to the Nashville Area IHS Office as the Area Consultant for the Office of Health Programs. She was then promoted to the IHS headquarters office in Rockville, Md. where she served as the Director of the Community Health Representative (CHR) Program. Selected to serve as the Program Director for the Office of Clinical and Community Services supervising eight IHS Programs: Medical Records, Nutrition, HIV/AIDS, Pharmacy, Head Start, Maternal and Child Health, Health Promotion and Disease Prevention, as well as Health Education.

Wachacha was granted permission to work from Cherokee to serve as the Lead Consultant for IHS headquarters providing leadership, training and oversight to tribal and IHS programs across IHS on a wide variety of health care issues. Throughout her tenure with IHS, she also was a Budget Writer for the IHS and assisted in the submission of budget justifications, reports, statistics and data to Congress.

In addition to a successful work career, Mary was adventurous and loved to travel. She enjoyed studying Cherokee history and was involved in many initiatives to restore, protect, teach and strengthen understanding of Cherokee history. She served on the Cherokee Community Foundation Board, North Carolina Trail of Tears Association Board, Elders Council for the EBCI Tribal Historic Preservation Office, and The WCU Cherokee Center Advisory Board. She loved to study genealogy, particularly for the Owl family. A strong advocate and supporter of learning and education, she was one of the founding members of the Richard (Yogi) Crowe scholarship committee which was created to provide support for graduate studies for members of the Eastern Band of Cherokee Indians. An avid reader and lover of music, she played the piano and guitar, spoke French and was a supporter of the arts, particular local artists. She valued Cherokee crafts and loved collecting baskets, pottery, carvings, and local postcards of Cherokee.

She was a vocal member of the Yellowhill community and spoke up often on Tribal matters that she was passionate about. She was also a lifelong member of Cherokee Baptist Church where she often played piano and sang in the choir.