The mission statement of the American Legion Auxiliary starts “in the spirit of service, not self”.  Patsy Everhart Ledford, Steve Youngdeer American Legion Post 143 Auxiliary president, has served the members of the Eastern Band of Cherokee Indians for years in various capacities, and now she is an honorary member of the Tribe. 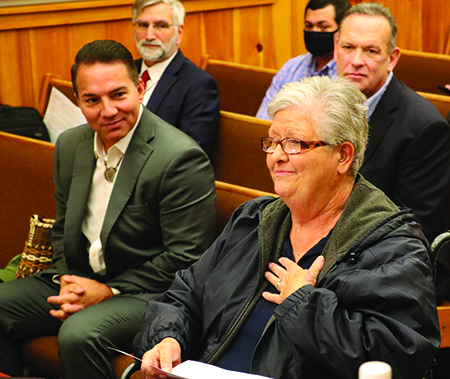 Patsy Everhart Ledford expresses her gratitude after Tribal Council passed Res. No. 29, designating her as an Honorary Member of the Eastern Band of Cherokee Indians, on the morning of Thursday, Nov. 4. (SCOTT MCKIE B.P./One Feather photos)

Res. No. 29 (2021), passed unanimously by Tribal Council during its regular session on Thursday, Nov. 4, made the designation stating, “Patsy Everhart Ledford embodies the Auxiliary’s mission statement beginning with educating our citizens by working 17 years at the Cherokee High School; and, during her time at the high school, Mrs. Ledford taught physical education and coached cheerleading, softball, volleyball, and assisted with track and football.”

She went on to say, “It just took me by complete surprise and usually that doesn’t happen.”

Principal Chief Richard G. Sneed noted he has known Lambert for years.  “Since my time in office, really from day one when I was in the Vice Chief’s office all the way through my current term, Patsy has always advocated for the people.  She has lived a life of service.  She cares very deeply about the community.  She cares very, very deeply about our veteran community.”

He added, “Every time she comes through the door it is never anything for herself.  It is always for somebody else.  I think that she embodies the values of who we are as a people.  She embodies that, personifies that, and demonstrates that throughout her life.” 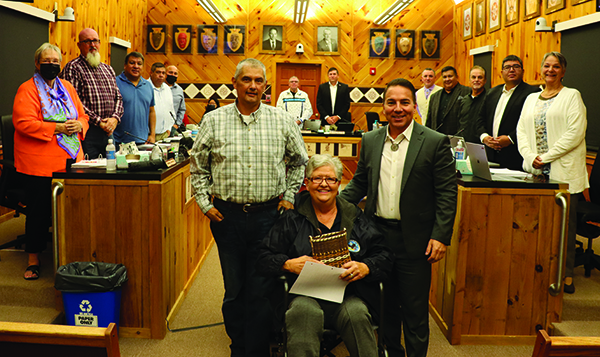 Vice Chief Alan B. Ensley commented, “Myself being in the Vice Chief role, every time the phone rings when it’s her, she’s advocating for some issue for the veterans and our community.  I want to thank her for her service and what the ladies do…”

Cherokee Co. – Snowbird Rep. Adam Wachacha, a U.S. Army veteran, made the motion to pass the resolution and said, “I appreciate your smiling face every time we see you at any of the veterans’ events or any events that you’re around…thank you for your service.”

Birdtown Rep. Boyd Owle said Ledford is a wonderful advocate for the community and veterans and noted, “She has been a wonderful asset to the Tribe.”