BRYSON CITY – The Cherokee Braves (5-4) ended their regular season in style with a big win over rival Swain Co. (4-5) on the rainy evening of Friday, Oct. 29.  Cherokee gained 324 yards in total offense en route to a 36-7 victory over the Maroon Devils. 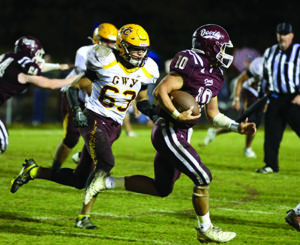 Penalties plagued Swain Co. all night long, and they ended the game with 15 for 129 yards compared to Cherokee’s 7 for 75 yards.  While each team ran 48 plays each on offense, Cherokee dominated the time of possession 44:09 to 18:01.

With rainy conditions prevalent throughout, Cherokee relied heavily on the run all evening with 263 total yards rushing to only 72 passing.  Michael Driver led Cherokee’s ground attack with 18 carries for 109 yards and 1 TD, and Elijah Watty had 12 carries and 71 yards and 1 TD.  Donald Bradley, Braves quarterback, completed 4 of 5 passes for 72 yards and 2 TDs.  Swain Co. was led by Carson Taylor who rushed 10 times for 63 yards.

Driver and Watty were named Cherokee One Feather Co-Players of the Game by the WNCC 104.1 FM broadcast crew.

The Braves were led defensively by Luke Climbingbear with 16 total tackles (14 assist, 2 solo) followed by Watty with 10 (5 assist, 5 solo) and Malakai Fourkiller-Raby with 7 (3 assist, 4 solo).

Due to the rain, both teams started slowly and the first score of the game didn’t come until the 1:22 mark of the first quarter when Cherokee’s Chase Calhoun ran 28 yards for a score.  The two-point conversion failed and Cherokee led 6-0.

The Braves added two scores in the second quarter.  First up, Driver ran 8 yards for a score.  Bradley ran for the two-point conversion to make it 14-0 Braves.  Then, with just 44 seconds left before the half, Bradley hit Tso Smith on a 29-yard touchdown pass.  The two-point failed and Cherokee took a 20-0 lead into the locker room. 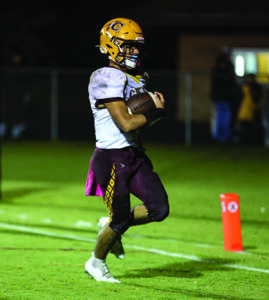 Michael Driver runs into the end zone on a score in the second quarter. On the night, he led Cherokee with 18 carries for 109 yards and 1 TD. Along with Elijah Watty, he was named a Cherokee One Feather Co-Player of the Game as selected by the WNCC 104.1 FM broadcast crew.

There was no scoring in the third quarter.

Cherokee got the fourth going as Bradley through a 33-yard touchdown strike to Raymond Bradley.  Watty ran for the two point conversion and the Braves extended their lead to 28-0 with 11:52 left in the game.  Then, with 6:29 left in the contest, Watty ran 1 yard for a score.  Bradley passed to Driver for the two-point conversion and Cherokee led 36-0.

Swain. Co. would get on the board with just over 4 minutes left in the game as Dawson Fuller ran 2 yards for the score.  Gavin Lanning added the extra point to make it 36-7 in favor of Cheorkee which is how the game would end.

The Braves will be at home this Friday, Nov. 5 as they host Cherryville at 7:30 p.m. in the first round of the 1A NCHSAA state playoffs.