Six representatives of the Eastern Band of Cherokee Indians’ Natural Resources Department (EBCI NRD) joined staff members of The American Chestnut Foundation (TACF) at their research farm in Meadowview, Va. on Monday, June 30 to tour their facilities and continue planning for American chestnut restoration on the Qualla Boundary. 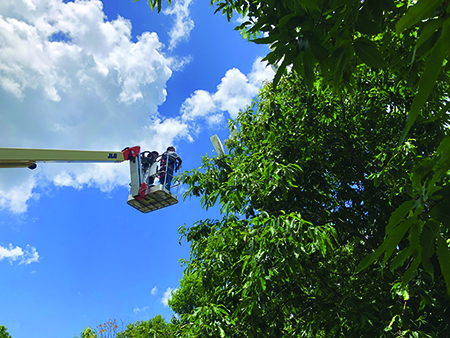 Tens of thousands of chestnut trees are planted on Meadowview’s 150 acres, each tree representing a diversity of genes and showing varying levels of resistance to the chestnut blight. The EBCI NRD saw trees that were pure American chestnut consisting mostly of stump sprouts due to chestnut blight girdling the lead stem, 20–30-year-old trees cross-pollinated with Chinese chestnut that were able to grow with the blight, and saplings that were 15/16ths American chestnut and 1/16th Chinese chestnut—embodying the best hope for being as much American chestnut as possible while still containing genes that could increase their chances of resisting the blight.

Next steps include: 1) prepping an orchard site within Tribal Reserve for blight-resistant American chestnut trees to be grown for seed, 2) locating surviving populations of American chestnut within EBCI land (particularly those that are flowering) to be used for cross-pollination efforts, and 3) gathering information about how American chestnut has traditionally been used to be shared with the EBCI community.

If you know of any existing, flowering, American chestnut populations within the Qualla Boundary, please reach out to the EBCI Natural Resources Department (jaimvanl@ebci-nsn.gov, tommcabe@nc-cherokee.com, or 359-6225). They are also gathering knowledge about the traditional uses of American chestnut, whether that be for food, medicine, craft, or stories, songs, or other ways in which the Tribe related and still relates to this culturally significant plant.  Any information given will be managed confidentially by the EBCI Natural Resources Department to fulfill American chestnut restoration initiatives. If you have time, please consider taking an anonymous survey about American chestnut: https://forms.gle/5tWBWwQbjoBKhCkV7