A new grant from the Center for Craft is supporting an effort to share traditional metal working techniques with the western North Carolina community. The grant was awarded to William Rogers, of Rogers Metals, and two members of the Eastern Band of Cherokee Indians (EBCI) who have been working with him for the past six years.  James Wolfe, from Big Cove, and Snowbird resident Nathan Bush met Rogers when he was teaching hammered copper on the Qualla Boundary. Now, both former students will have a chance to extend their own experience to teaching. 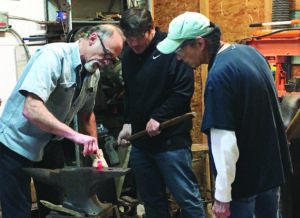 The grant provides funding for a series of introductory workshops available to the community at no cost. The 3-hour workshop courses will begin in late April and extend through May. Each workshop is open to anyone interested in learning more about hammered copper or blacksmithing. Class openings are limited to due to COVID-19 protocols. A prospective student will work one-on-one to learn techniques of working either copper or steel from Wolfe and Bush who will teach at Rogers Metals studio in Cullowhee.

An artist all of his life, Wolfe is known for his figurative sculptures, complete with miniature weapons. After working as an historic interpreter for more than a decade, he set out on his own as a full time professional artist working in a variety of media including decorative metals.

Bush worked at the Oconaluftee Indian Village as a gardener and moved on to become Program Coordinator. He is an expert on medicinal plants, something he learned from his mother and grandmother. Both Wolfe and Bush have demonstrated the art of hammered copper at the Village where they met Rogers.

A long-time professional smith, William Rogers makes custom metalwork and teaches.  With earlier grants from the state Arts Council and Cherokee Preservation Foundation, he was artist-in-residence at several are schools, including Cherokee Central Schools, where Wolfe and Bush were assistant teachers.

Since they began working together in 2015, the trio of artists have collaborated on a number of projects. In 2018, they created and installed an Eternal Flame sculpture for the Stecoah Cultural Arts Center. The seven-foot-tall, freestanding sculpture was designed and fabricated by Rogers who incorporated original designs in copper by Bush and Wolfe. The team has recently finished a sculpture of Grandfather Buzzard for the Cherokee Hospital. The life-sized buzzard has a six-foot wingspan and soars, suspended by a steel cable, in the rotunda of the hospital. In 2020, the team was the recipient of a prestigious North Carolina Arts Council grant that allowed for a master artist to work as a mentor to selected apprentices. This new grant builds on that experience, allowing the two younger artists to teach their skills to others.

Class space is extremely limited and will be filled on a first come/first served basis. To sign up for a class, contact RogersMetals@gmail.com.