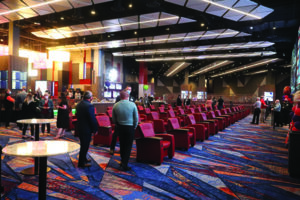 Both the Harrah’s Cherokee Casino and the River Valley Casino host a sportsbook, making them the first legal sports betting venue in North Carolina. The location at Cherokee offers expansive seating areas, 90 feet of television screens, VIP seating, and more. The Book opened to the public at 11 a.m. on Thursday, March 18.

The first legal bet made in the state was by a guest named Matthew Litsky, who wagered for North Carolina to beat Wisconsin in the Men’s NCAA Tournament. Unfortunately for Mr. Litsky, the Tar Heels lost by 23 the following evening.

The process to get to last Thursday’s ribbon-cutting dates back nearly three years and has left many people asking the question, “What took so long?”

“If we go all the way back to late May of 2018, PASPA (Professional and Amateur Sports Protection Act) was overturned by the Supreme Court of the United States. That opened the door for Tribes and other states to pass legislation to enter into sports betting,” explained Principal Chief Richard G. Sneed.

In July 2019, the N.C. State House and Senate passed N.C. Senate Bill 154. Governor Cooper signed it this month as well, but there were still hang-ups.

“I suppose you really would have to ask the Governor’s legal team as to what the hold-up was,” said Chief Sneed.  “We’ve been involved in Class 3 gaming for over a decade. We have a very extensive and comprehensive Class 3 gaming compact with the State already. In the opinion of our legal team, we were simply adding one more Class 3 gaming amenity. So, all of the frameworks were already in place. All guidelines and regulations were already in place. We were simply adding one more game. To me, it was political. But that’s just my opinion.” 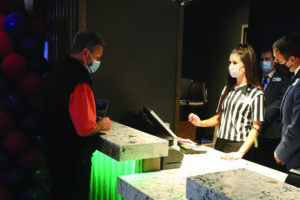 The first legal bet made in the state was by a guest named Matthew Litsky, who wagered for North Carolina to beat Wisconsin in the Men’s NCAA Tournament. Unfortunately for Litsky, the Tar Heels lost by 23 the following evening.

He continued by saying that this is still a fantastic achievement and that regardless of all the delays, The Book is open. Chief Sneed said that the sportsbook offers a lot of potential but estimates for revenue are difficult to decipher at this time.

“Keeping in mind, sports betting is really one of those things – it’s an amenity that you want to offer for your guests. As far as the amount of revenue that we’ll see, we know that percentage-wise it’s about a 10% hold win for the house. So, we’ll just have to see what the volume of betting is. It’s not something like slots where it’s a large win all the time. But again, it is an amenity that many of our guests want.”

“It just brings a different customer,” said Robinson.  “It typically skews a little younger. It’s typically a customer that will tie in really good to our World Series of Poker offering that we have.”

Robinson touted the technology and options available at The Book. Currently, Harrah’s Cherokee can take bets on collegiate and professional sports, as well as off-track racing events. He said that they would be adding a few more as time allowed, including different horse racing bets.

“We’re really on the Caesar’s Entertainment sportsbook network. There are a few limitations that may change from jurisdiction to jurisdiction, but I would say about 90-95 percent of any bet you could make in Vegas or another sportsbook you can make here,” said Robinson. 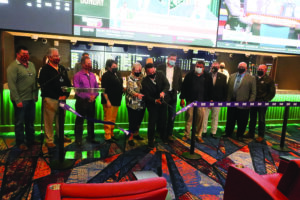 Tribal leaders of the Eastern Band of Cherokee Indians cut the ribbon to officially open The Book at Harrah’s Cherokee on the morning of Friday, March 18.

A significant facet that is missing from The Book is the option of online or mobile gaming. The timing of Cherokee’s sportsbook was perfect for betting on March Madness. In a study conducted by Morning Consult, approximately 47.4 million Americans will wager on the NCAA Tournament this year, a number that is about the same as the last tournament in 2019.

However, online betting for this event is expected to surge up to 17.8 million, about a 206 percent increase from 2019. While you could attribute this to life in the COVID-19 pandemic, online betting has been steadily growing in the betting world year-by-year.

“We would love to have the opportunity to do online or mobile gaming, that’s something that’s going to have to be worked out at the state level as well. Under IGRA (Indian Gaming Regulatory Act), all gaming must take place on Tribal trust lands. We could geofence the Boundary and offer mobile sports betting. We would love to be able to participate state-wide, and we’re looking into that. But that’s going to be something that we have to do through the State legislature and obviously something that would have to be approved by the Governor as well,” said Chief Sneed.

Robinson concurred, saying that it will be a complex process to undertake, but one that could offer a lot of value.  “It’s a very expensive situation if you’re trying to geofence an area. A lot of us are working to determine does it truly make sense to try to geofence a smaller region or possibly wait and see what happens with the state-wide mobile. If that happens, we would definitely want to jump into that world.”

2021 looks to be a busy year for Harrah’s Cherokee Casino and Resort. Along with the sportsbook, the casino is also looking to finish construction on its new hotel, convention center, and parking garage.

For more information on The Book, including house rules, visit https://www.caesars.com/harrahs-cherokee/casino/the-book.