School Board returns to in-person meetings

After months of email polls, the Cherokee Central Schools (CCS) Board of Education returned to their social-distanced set up on Monday, March 15.

This also marked the first day under ‘Plan B’ for CCS, the hybrid system that has brought students back to classrooms on a limited basis.

Much of the conversation centered on a financial update offered by the Cherokee Boys Club. Howard Wahnetah, Ashford Smith, and William Lowe delivered this report. Due to the pandemic, spending is much lower than it should be at the school. Expectations would have 67 percent of the budget spent at this point in the year, but the school has only spent 51 percent. 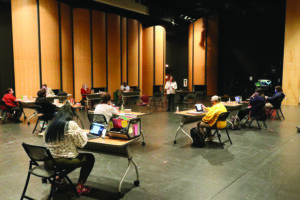 After months of email polls, the Cherokee Central Schools (CCS) Board of Education returned to their social-distanced set up on Monday, March 15. (JONAH LOSSIAH/One Feather photo)

Lowe said that this would typically be a concern, but since CCS has been in Plan C until now, it’s understandable. A large piece of the schools’ budget is the field trip and event budget, which hasn’t been touched.

The Board has only used around 23 percent of the operational budget, with the goal being at 66 percent. This comes from the fact that CCS students have not been on campus. They discussed ways to disseminate their discretionary budget at the meeting, but nothing was decided.

There was a push to ensure that the new CCS budget includes a raise for staff at the school. This had been accounted for at previous budget meetings, but the pandemic disrupted that process. Those discussions planned for a 5 percent raise for teachers and 2.5 percent for teachers’ assistants. This conversation centered around a cost of living raise for all employees at CCS. The CBC said that they would bring those estimates at the next meeting they attended.

Polly Kelley, EBCI Investment Committee, also offered an update to the Board. Following a volatile period in the market, the CCS Reserve fund has made significant gains of $1.5 Million in the last six months. The total of the reserve account now rests at $14.9 million.

The consent agenda was unanimously passed after discussing the qualifications and needs for volunteers for CCS’s sports teams. School Board Rep. French-Browning was curious as to why there were so many volunteers for the softball team than for other sports. There were five for the high school and two for the middle school to confirm. This discussion lasted approximately 15 minutes and ended with no alterations.

Superintendent Murray turned his attention to the importance of summer school. He first wanted to assure the Board that summer school would be necessary for many individuals but that it was not being used as a punishment by any means. He says that there will be options for filling in gaps in a student’s education and that summer school will be personalized this year.

Assistant Superintendent Beverly Payne said that her top concern for the summer programs is staffing. They are planning for face-to-face learning but are also ready if that isn’t possible. She said that she is just concerned about teachers’ fatigue and is worried about how many teachers will be available for the summer.

The Board also approved a plan placed by Payne regarding the third line of COVID relief offered from the Federal government. This is the Coronavirus Response and Relief Supplemental Appropriation (CRRSA) funding. The Board needed to approve Payne to move forward with the process, and they needed to sign off on the assurances for this fund.

The amount could total $4.8 million, and the school has 18 months to spend it on school projects. Payne says that the school needs to report the school action plan to the Bureau of Indian Education (BIE). This would go to any equipment, materials, or long-term projects to assist with the COVID relief and reestablishing schools post-pandemic.

Before finishing the meeting, School Board Rep. Reed-Cooper pushed the Board about when they would be comfortable to open with “Plan A.” She said that she is still concerned with the students’ and teachers’ mental health and that CCS should fully open as soon as possible.

Superintendent Murray agreed with Rep. Reed-Cooper’s sentiment but said that seeing it was just the first day back under Plan B that it was too soon to tell. The Board agreed that it would be worth revisiting around Spring Break, which starts April 12 at CCS. There is a chance that the Board will try to move to Plan A for the final five weeks of school.

One of the final pieces of business discussed at the meeting was the 2021-22 school calendar. The proposed calendar was approved, without amendment, though there was a lengthy discussion on what could occur in 2021. The Board agreed that they could alter the calendar as needed. Still, the climate of uncertainty made it difficult to make major changes or plan so far in advance.

One of the items to watch is the Cherokee Indian Fair. Rep. Karen French-Browning advocated for the students to have a whole week off for the Fair. Without certainty that the Fair was even going to be held, the Board promised to address it at the appropriate time.

The next meeting of the CCS Board of Education will be held Monday, April 5. Before then, they will also take part in the Joint School Board meeting on Tuesday, March 23, with Swain County Schools. That meeting will take place at CCS.