Note: This article was published in the Cherokee One Feather in March 2019.  It has been translated into the Cherokee syllabary here by EBCI Beloved Woman Myrtle Driver, a fluent Cherokee speaker, to aid in language learning. 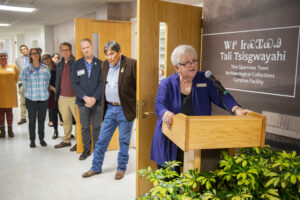 Dr. Riggs said during Thursday’s discussion on the resolution, “We wanted to do this in order to keep the Cherokee identity and the identity of that particular place in mind of everyone on campus, and we think that this will be a lasting reminder.  We will then compel faculty and staff to learn how to say the name itself in proper Cherokee.”

The resolution gives a summary of the historical significance of the name and area, “In 1826, Cherokee Assistant Principal Chief, Charles R. Hicks, wrote a series of letters to future Chief John Ross to educate him on traditional history and prepare him for leadership roles.  In these letters, Hicks relates a migration story from the 1770s that concludes with Cherokees settling at a place called Two Sparrows (Tali Tsisgwayahi), near the head of the Tuckasegee River.  Another elder, who gave testimony in the 1830s, identifies Two Sparrows as a holy place, where the surrounding hills were supposed to contain large villages of immortals.”

It went on to state, “In 1887, Smithsonian ethnographer James Mooney recorded Cherokee sources who referred to the mound and ancient town site on what is now WCU’s central campus as Tsisksitsi, meaning ‘a place typified by sparrows’.  Mooney’s Tsisk(waya)sitsi (where the sparrows are, in a typical fashion) and Hicks’ Tali Tsisgwayahi (Two Sparrows Place) appear to be the same and designate the place that Western Carolina University is now located.”

Principal Chief Richard G. Sneed thanked those responsible for bringing the resolution forward and said, “I think it is imperative that everyone in the community is aware of the relationship that we have with Western Carolina University.  It is very unique in that the university, probably unlike any other organization in the region, is very mindful of the fact that the property on which they reside was a Cherokee town and that there was a mound there.”

He added, “I’m just very grateful to the Board of Trustees, to the Chancellor, to Dr. Riggs and his staff for honoring and recognizing the Eastern Band of Cherokee Indians and the history of the land on which they reside.”

Following the vote, Big Cove Rep. Perry Shell commented, “I think it’s very important that we name locations and sites in traditional names, Cherokee names.  I would like to see more of that on tribal lands because there are several locations that are called something other than what the Cherokee name for it is.”