Note: This article was published in the Cherokee One Feather in September 2019.  It has been translated into the Cherokee syllabary here by Marie Junaluska, a fluent Cherokee speaker, to aid in language learning.

The Museum of the Cherokee Indian prides itself on educating visitors on the culture and life ways of the Eastern Band of Cherokee Indians.  Now, visitors can take a walk back in time as they stroll along a walkway adjacent to the Museum that staff has decorated with Mississippian Period (ca. A.D. 800 to 1600) designs and motifs. 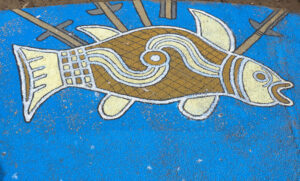 Mississippian Period (ca. A.D. 800 to 1600) designs and motifs were painted on a sidewalk at the Museum of the Cherokee Indian by staff in late summer 2019. (SCOTT MCKIE B.P./One Feather photos)

“There were bad spots along the sidewalk that were a liability issue,” Dawn Arneach, Museum interim executive director, said of the impetus behind the project.  “It was a hazard.”

So, Museum staff, led by Dave Maney, Museum maintenance, busted up the bad parts of the sidewalks and poured several new slabs.

Arneach noted, “Because of the curve of the sidewalk, we thought it would be neat to paint it blue to make it look like a river.”

That initial idea took off and staff members developed ideas of how to decorate the “river”.  Designs are found along the walkway including the uktena, the giant horned serpent, which is found intertwined throughout.

Wild Boy, from the Selu and Kanati story, was the first design element painted on the new “river” walkway at the Museum. Tyra Maney, a member of the Eastern Band of Cherokee Indians and a Cherokee Friend at the Museum, painted the motif.

“Originally, we thought it would be cool to do water designs from the Mississippian era because from that period are a lot of designs that we still use today,” said Tyra Maney, a Cherokee Friend at the Museum.  “We talked about incorporating the water theme, and originally I wanted to paint Wild Boy from the Selu and Kantati story because he spawned from the river.  From there, we found other designs and other themes that went with the river.”

Mike Crowe Jr., a Cherokee Friend, commented, “We selected designs from the Mississippian era based on shell engravings, both from gorgets and cups from that era.  We also used stories that we were familiar with and incorporated them into the river idea.”

The idea behind painting the walkway was not only about decoration – it was and is about interaction.  Museum staff hopes that the walkway will become a point of interest for visitors as they first enter the facility.

“I think that exposure, on any level, fits right in with our mission at the Museum – to preserve and perpetuate the culture.  This will serve to initiate conversations with our guests and provide some talking points.”

Arneach said plans are to have small placards placed beside each design describing the motif and its place in Cherokee culture and history.  “That way, visitors can come in and ask, ‘what do you mean by Wild Boy?’  Then, our Cherokee Friends would have that beginning talking point.”

Dakota Brown, Cherokee Friends program manager, said, “We have the Mississippian Period represented in the Museum and so it gives them a visual reference for that as well.  In the Museum, there isn’t a lot of artwork from that time period, so this gives a representation of that.”

Other Museum staff who worked on the project include: Jarrett Wildcatt, Lucia French, Charla Reed, and Helen Gloyne Snow.

For more information on the Museum of the Cherokee Indian and its programs, visit www.cherokeemuseum.org or call 497-3481.