With flags billowing in the breeze, two Cherokee heroes were honored for their illustrious military service during a ceremony at the Cherokee Veterans Park on the morning of Friday, March 12.  Lt. Lewis H. Harding and PFC Reuben E. Taylor, both elders of the Eastern Band of Cherokee Indians (EBCI), were honored for their service by the members of the Steve Youngdeer American Legion Post 143. 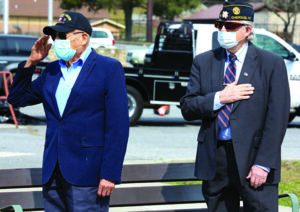 PFC Reuben E. Taylor and Lt. Lewis H. Harding, both elders of the Eastern Band of Cherokee Indians (EBCI), were honored for their service by the members of the Steve Youngdeer American Legion Post 143 during a ceremony at the Cherokee Veterans Park on the morning of Friday, March 12. (SCOTT MCKIE B.P./One Feather photos)

Lt. Harding has served as Commander of Post 143 since 1997.  He enlisted in the U.S. Navy Reserve in June 1957 and completed basic training in Bainbridge, Md.  Three years later, he applied and was accepted to Officer Candidate School in Newport, R.I.  Upon completion, he was commissioned as an Ensign on Aug. 17, 1960.

Lt. Harding was accepted to and completed Aviation Flight School in Pensacola, Fla. after which he also completed Advanced Flight School in Corpus Christi, Texas.  He was designated a Naval Aviator in August 1963.  As a part of Air Wing 10, Attack Squadron 176, he was transferred to the USS Intrepid CVA-11 in 1964 which was deployed off the coast of the Republic of Vietnam.

During his time there, he flew over 80 combat missions.  While reading his biography during Friday’s ceremony, Warren Dupree, Post 143 service officer, stated, “Combat sorties consisted of flying missions in A-1 Skyraiders and A-4 Skyhawks in the skies of both South and North Vietnam.  Many of these missions were flown over Hanoi and Hai Phong Harbor.  And at this time period, this air space was the most heavily defended in the world.”

Sam Lambert, an EBCI elder who serves on the N.C. Commission on Indian Affairs, honored Cdr. Harding with a plaque from the Commission.  ” He has served his country honorably, and he’s also served his Tribe.  He has served on so many boards, so many hours of his service and time have been given.” 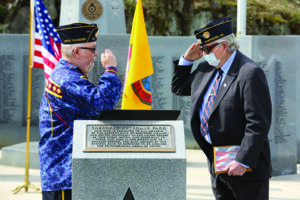 Sam Lambert, an EBCI tribal elder and member of the N.C. Commission on Indian Affairs, salutes Lt. Harding after presenting him with a plaque from the Commission. Both men served in the U.S. Navy.

Lt. Harding stated, “I am very grateful for this award.  It recognizes not just the commitment, dedication, sacrifice, and service of one military guy but hundreds of thousands – many of which are not here to celebrate with us today but to whom we all owe an eternal debt of gratitude.  I am so grateful for this recognition, but it belongs to so many more.”

In 1943, PFC Taylor was deployed to Casablanca, North Africa after which they went back to Europe.  He was a part of Operation Market-Garden, also known as the Invasion of Holland, on Sept. 17, 1944.  Several months later, he and his fellow soldiers took part in the Battle of the Bulge.

PFC Taylor said in a previous interview with Dupree, “The Bulge, Christmas Eve 1944, we were stuck in the freezing weather thousands of miles from home.  We were eating ice-cold K-Rations and C-Rations.  Our feet were numb from the freezing weather we were living in.  We were being shelled nightly from German 88s that made it impossible to get any rest.  Our machine gunners were dead tired.”

He continued, “After witnessing the horrors of war, as friends were blown away, we were near exhaustion both mentally and physically.  Sixteen days in the Battle of the Bulge was worse than 73 days in Holland.” 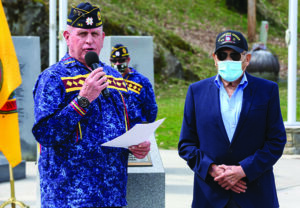 In the same interview, PFC Taylor noted, “For myself, as well as all those others in the 82nd Airborne Division who remember the roar of planes at night, the instant when the warning light flashes on, and the magnificence of the night skies full of swaying parachutes, I want to say this, we hope with all our hearts that there will always be an 82nd Airborne Division.  If you can know that somewhere young men will dare the challenge to stand up, hook up, and know the moment of pride and strength which is its reward, then a part of us will always be alive.”