The Atlanta Braves presented a donation to the New Kituwah Academy and Cherokee Speakers Council on Wednesday morning, March 10. 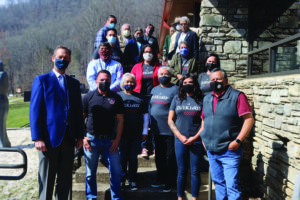 Derek Schiller, president and chief executive officer of the Braves, traveled from Atlanta to offer the two checks. The money is connected to a merchandise project the team launched in collaboration with the Eastern Band of Cherokee Indians (EBCI).

“A year and a half ago, I came up to Cherokee,” said Schiller.  “I began a new relationship, which started with Chief (Richard G.) Sneed and ultimately met the Tribal Council as well. On behalf of the Braves, I made the commitment that we were going to increase the amount of relationship that we had. We thought it was very important, especially given our name and the prior relationships that we had.”

“We’ve begun a number of different initiatives. One of the coolest ones, in our opinion, was the ability to promote the language and syllabary. Do so in fun ways and also teach our fans a little bit about our connection with the EBCI.”

The Speakers Council was given the task of offering a translation for ‘braves.’ Before they did, the Council wanted to make sure the Major League Baseball franchise was on the same page. Over the summer, Council Administrator Bo Lossiah sent a statement from the Speakers Council regarding their requested involvement in the project. They wished to address what they felt were insensitive or misrepresented aspects of current or former Braves’ entertainment.

“We have a rich history and culture. The overview is that we are happy to share for the education and goodwill to honor our neighbors. And we expect the same. For that, the chop-chop chant must go. We would prefer no tomahawks, feathers, or Indigenous characters. You can honor your baseball team and the city of Atlanta without those items. Without those items, we would be happy to assist,” said Lossiah in the statement.

The final design of the shirt does not have any feathers or tomahawks. However, the tomahawk still plays a prominent role in the Braves official logo.

After communicating their requests to the team, the Speakers Council proceeded to craft three translation options. They landed on ‘anetsovsgi,’ which means ‘ballplayer.’ 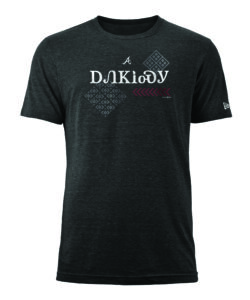 The ‘anetsovsgi’ shirt is being sold by the Atlanta Braves. The syllabary, offered by the Speakers Council, translate to ‘ballplayer.’ (Image courtesy of Atlanta Braves)

“We asked around about how to say Braves in the Cherokee language. Different people had different opinions on what ‘braves’ meant. We were wanting to give them what it really meant, not just to throw it out there ‘this is how you say brave,'” said Roger Smoker, chairperson of the Speakers Council.

The Braves promised they would donate most of the proceeds from shirt sales to the Tribe in some way. At the time of donation, profits reached around $14,000.

With language being such a focus from the Braves perspective, the parties decided that the two beneficiaries should be the Kituwah Preservation and Education Program (KPEP) and the Speakers Council.

After discussions with the school, the Braves were inclined to go a step further and wished for the donation to fund a teaching position with the school. The school presented a figure of $30,000, and the Braves made up the difference.

“We will use the funds to contract a Cherokee Language Teacher Training assistant,” said Kylie Shuler, manager of KPEP.  “We’re really working on our staff training for Cherokee language. So, this donation is huge for our mission.”

Not wanting to leave the Speakers Council without, the Braves also agreed to donate an additional $7,000 to the Council, which was the initial amount expected with a 50/50 split of the profits. The Speakers Council, who were recently granted 501(c)(3) non-profit status, will add this to their general fund to assist speakers on the Boundary.

Towards the end of 2019, the EBCI formed the Atlanta Braves Cultural Committee. This group of three unpaid individuals is tasked with maintaining consistent communication with Braves on projects such as the ‘anetsovsgi’ shirt. The committee comprises one representative selected by Tribal Council and two chosen by the Principal Chief. Laura Blythe is the current Council representative. Ashely Martin and Manuel Hernandez hold the Chief-selected positions.

“In talks, they’re wanting to know ‘how can we help your community?’ or ‘what types of things would you want from us to be able to show support for your community? How can we recognize native nations in a better light?’ Those various things they were curious about and wanted to build this partnership.”

Schiller said that this was not a one-off statement but the beginning of a positive relationship moving forward. He said that the Atlanta Braves need to consider who they are representing and how they can make a genuine impact.

“We stepped back and made sure that the very first thing that we did as the Atlanta Braves organization is to listen and to learn. When we did that, one of the things that came out of that was that the syllabary and the language was a really important part of what we could do as the Braves organization to amplify that and make sure that language was preserved, protected, and people knew about it.”

The Braves will continue to offer the shirt, and Schiller says that their team looks to progress their relationship with the EBCI.