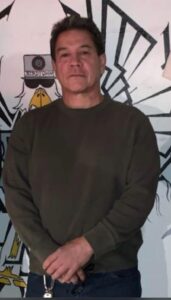 Harold R. Rattler, of the Birdtown Community, went home to be with the Lord Monday, March 8, 2021. A native of Cherokee, he was the son of Elsie Wolfe Rattler of Cherokee and the late Leroy Rattler. Harold was fondly referred to as Harry-O.  An avid sports watcher, he was known for his laugh and having a good time.

He was a graduate of Cherokee High School and Haskell  Indian Junior College. A veteran of the U.S. Navy, he was a man of many talents who worked construction, drove semi-trucks, pottery making, and loved reading the Bible. We will all miss you, your laugh, your smile, and all the good times Harry-O.

In addition to his mother Elsie, he is survived by his significant other, Marlena Toineeta with whom he has two sons, Payne and Rajun; as well as Terri Rattler, the mother of four sons Diamond, J.C., Trenton, and Travis; three grandsons, Shaun, Theron, and T.J.; three granddaughters, Peyton, Scarlett, and Renae; brothers, Jody, Tim, and Sammy (Kari) Rattler; aunts, Lucille Wolfe, and Laura (Bob) Blankenship; and uncle, Bill (Lucille) Wolfe to include countless nieces, nephews, and extended family.

Funeral services will be held from 6 p.m. to  8 p.m. Thursday, March 11 in the chapel of Crisp Funeral Home. Joe Wolfe will officiate. A graveside service will be held at 11 a.m. Friday, March 12 at Rattler Mountain Cemetery.