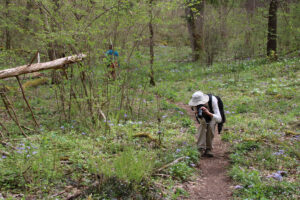 Beginning Thursday, March 11 at 10 a.m., group leaders may make reservations at www.recreation.gov for a special park use permit to access the area for groups of eight to twelve people. Leaders may reserve either a morning permit, allowing access from 7 a.m. to 10 a.m., or an afternoon permit, allowing access from 2:00 p.m. to 5:00 p.m. Two permits will be issued each weekday during the reservation period. A standard special park use fee of $50 is required for each permit, along with a $6 reservation fee. Payments must be made online through www.recreation.gov at the time of reservation. Group leaders may reserve two permits per season.

During the trial period, groups of more than twelve people are not allowed in the area at any time. In addition, no permits will be issued on weekends. The intent of the trial reservation system is to better protect sensitive wildflower species that can be damaged when large groups crowd around plants off-trail to take photos or closely view blooms. Individuals and small groups, less than eight people, may access the Whiteoak Sink area without a permit throughout the wildflower season. Volunteers will be available on site to provide safe-viewing information and to collect monitoring data.

The Whiteoak Sink area is primarily accessed from the Schoolhouse Gap Trail between Townsend and Cades Cove. In addition to stewardship of sensitive wildflower populations, resource managers continue to be concerned about critical habitat for bats found at the same location. In 2015, park officials closed the area during the winter months to limit human disturbance to important bat hibernacula and to help hikers avoid interactions with White-Nose Syndrome (WNS) infected bats, which had been documented flying erratically during the day and diving towards people. Unfortunately, recent monitoring has documented a dramatic decline in bat populations throughout the Whiteoak Sink area. For that reason, park officials have determined that the full winter closure is no longer necessary due to the extremely low number of bats in the area. However, access within 25 yards of the Blowhole Cave opening is prohibited from October through May to reduce disturbance to remaining bats.

Park managers have been monitoring sensitive wildflower species in the Whiteoak Sink area since 2016. During the first year of monitoring, managers documented 62 plants that were damaged by trampling and the creation of 370 feet of new social trails by visitors trying to view or photograph individual plants. Based on this monitoring, park managers implemented several strategies to protect wildflowers during the peak season that draws over 5,000 visitors to the site. A volunteer cadre provides daily information to visitors about how to safely view wildflowers and signage is installed to help remind photographers about the importance of remaining on the trail to reduce soil compaction and trampling. With these efforts, plant trampling has been reduced by 80 percent, although, social trail creation and soil compaction is still a concern. By managing group size and frequency through this trial permit system, park managers hope to further reduce impacts.

For more information about permits for group access to Whiteoak Sink, please email Special Park Use Permit Coordinator Jamie Sanders at jamie_sanders@nps.gov or visit www.recreation.gov on March 11. At that time, more information will be available about permit details.