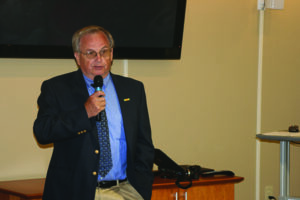 Ken Blankenship, an elder of the Eastern Band of Cherokee Indians from the Big Cove Community who served as executive director at the Museum for 28 years, passed away on Tuesday, March 2, 2021. He is shown speaking at the opening of the Ken Blankenship Education and Research Wing at the Museum of the Cherokee Indian on June 14, 2010. (SCOTT MCKIE B.P./One Feather photo)

The Museum released the following statement on the day after his passing, “The Museum of the Cherokee Indian would like to extend our deepest condolences to the family of Mr. Ken Blankenship.  Mr. Blankenship served proudly as the Museum’s executive director for 28 years and was an integral part of making our Museum what it is today.  He was present at the groundbreaking of our current location, oversaw our last exhibit renovation and the building of the Ken Blankenship Education Wing.”

The statement continued, “His tireless and dedicated work to preserve and perpetuate the history, culture, and stories of the Cherokee people has had an invaluable impact on our staff, community, and the thousands of visitors that visit our Museum each year.  He will have a lasting legacy through our Museum, and we hope to uphold the commitment and devotion he showed through his years of exemplary leadership.”

In June 2010, the Museum opened the Ken Blankenship Education and Research Wing, an 8,500 square foot addition which has since been the hosting spot for numerous cultural classes as well as a spot for genealogical and historical research.

He began his tenure with the Museum in 1985 and retired officially on Dec. 27, 2013.  Blankenship served in the U.S. Army as an aviation mechanic during the Vietnam War.  Over the years, he served on numerous boards including 15 years on the Institute for American Indian Arts, the National Advisory Board for the Trail of Tears Association, Swain County School Board, and more.

“I have known Ken pretty much my whole life,” said Dawn Arneach, Museum interim director, “but, once I came to work at the Museum he had already retired as director.  But, whenever a system in the Museum was acting up, we could call on him.  He would show up and show us where the problem was and how to fix it.  He knew this place inside and out and was always stopping by to say ‘hi’ to staff and see how things were going.”

She added, “When we held Bob Blankenship’s retirement party a few years ago, we hung the most recognizable photo of Bob and Ken from Vietnam in front of a helicopter in the Ken Blankenship Education Wing lobby.  The Museum knew before we did about his passing.  The picture fell and broke yesterday (day of Ken’s passing).”

Dylan Girty, Museum employee, also has fond memories of Ken Blankenship.  “He always talked to you.  He hired me when I was 17 and still in school.  He would take me around and let me help him work on the Museum.  After he retired, he would come by and check on us and see how things were going.”

Ken Blankenship made an impact in every aspect of the Tribe’s cultural and tourism efforts.  John Tissue, Cherokee Historical Association (CHA) executive director, stated, “Ken was an amazing non-profit director and friend and partner to the Cherokee Historical Association. He loved his work at the Museum and it showed. He built the Museum into the world class institution that it is, and it was not unusual to see him picking up the trash left by tourists after hours, or changing the lightbulbs in the exhibit rooms. The Museum was an extension of Ken and his love for it was second only to his wife, his children and grandchildren. CHA and its staff are deeply saddened by Ken’s passing but are thankful that he was such a great friend and mentor.”