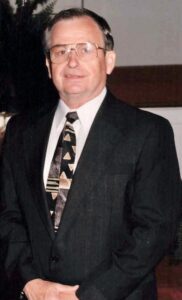 Kenneth Ronald Blankenship, 78 of Cherokee, went home to be with the Lord on March 2, 2021 at his home with family.  He was the son of the late Roy and Georgia Blankenship and loving husband of Barbara Blankenship for the past 52 years.

Ken grew up in Cherokee and was a member of the Eastern Band of Cherokee Indians.  After graduating Cherokee High School, he joined the workforce for a few years before joining the Army.  He served in Vietnam as a Helicopter Crew chief with the 155th AHC Troop.  After his tour of duty, he was stationed at Fort Rucker, Ala. where he met the love of his life Barbara and they married in 1968.

Ken and Barbara moved back to Cherokee where he began his life as a leader in his community.   He raised his family in Cherokee serving the community he grew up in through multiple positions and efforts.   Some of these positions include serving on the Board of Directors for the institute of American Indian Arts in Santa Fe, Swain County School Board member, National Advisory Board for the Trail of Tears Association, founding director of the Cherokee Preservation Foundation and many more.  He felt the most pride serving as the director of the Cherokee Museum which he made his lifelong project of enhancing public understanding and appreciation of the Cherokee Heritage.  In 2010, he was able to open the Educational and Research wing at the Museum to help these efforts continue.

Ken was a proud father and “Pop Pop”. He was an avid Maroon Devils fan and could be found at school events during his spare time supporting his children, grandchildren, and anyone else that could use words of wisdom or encouragement.   We will all remember his stories, jokes, advice, knowledge, laugh and that grin.

The family will receive friends from 11 a.m. until 1 p.m. Saturday at the Funeral Home.

In lieu of flowers, we are asking for donations to be made to any of the following:  Michael J Fox Foundation for Parkinson’s Research, Ken Blankenship Education and Research Center at the Museum of the Cherokee Indian, American Legion Post 143 or the local VFW chapter.