A bronze statue of the late PFC Charles George stands at attention at the Cherokee Veterans Park – a testament to the dedication, sacrifice, and valor that earned him a posthumous Medal of Honor.  Nearly 70 years since that fateful day in Korea when PFC George, a member of the Eastern Band of Cherokee Indians, gave his life to save several fellow soldiers, there are two bills going through the U.S. Congress that would authorize the construction of a Medal of Honor Monument in Washington, D.C. This project is long overdue, but it is nice to see it possibly coming to fruition. 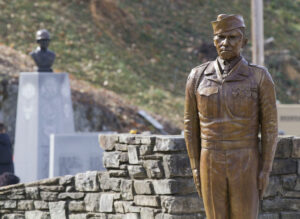 Legislation is currently going through Congress that would authorize the building of a Medal of Honor Monument in Washington, D.C. to honor the recipients of the Medal such as PFC Charles George who received it posthumously for his heroic actions saving several fellow soldiers during the Korean War. (SCOTT MCKIE B.P./One Feather photo)

The National Medal of Honor Monument Act was introduced into the House of Representatives in early January by Congressman Richard Hudson (R-N.C.) and into the Senate in early February by Senators John Cornyn (R-Texas) and Tim Kaine (D-Va.).

“An homage to America’s Medal of Honor recipients in our nation’s capital will remind visitors and residents like of what it means to put your country first,” Sen. Cornyn said in a statement.

The legislation puts the entirety of the project in the hands of the the National Medal of Honor Museum Foundation and states it “shall be solely responsible for acceptance of contributions for, and payment of the expenses of, the establishment of the commemorative work”.  No federal funds will be used in this project.

James T. Connors, National Medal of Honor Museum Foundation chief executive officer, said in a recent statement, “In our nation’s history, fewer than 4,000 brave Americans have received the Medal of Honor.  This monument – in the heart of Washington, D.C. – will celebrate the values of the Medal that we all hold dear as Americans: courage, sacrifice, patriotism, citizenship, integrity, and commitment.”

There currently exists a Medal of Honor Museum located aboard the USS Yorktown at Patriots Point in Charleston, S.C.  This is a nice facility, but this honor deserves a spot in D.C.

One point I’d like to make in this commentary is that I fully and wholeheartedly support the construction of this monument, but I also sincerely and wholeheartedly hope that 20 names will not be included.  I wrote a commentary in December 2020 entitled “Rescind Wounded Knee Medals of Honor now” in which I implored Congress to pass the Remove the Stain Act which would rescind medals given to soldiers who participated in the Wounded Knee (S.D.) Massacre on Dec. 29, 1890.  Even if this legislation isn’t passed and those medals are not rescinded, the National Medal of Honor Museum Foundation can do the right thing and make a conscious choice not to include those men in this monument.

The Medal of Honor means more, and including those men in with this monument of honor would be a disservice.

Retired U.S. Navy SEAL and Vietnam Veteran Michael E. Thornton, a Medal of Honor recipient, once said, “This Medal of Honor does not belong to me.  This medal belongs to every man and woman who has ever served their country.  We were doing what we were trained to do.    We were doing our job.”