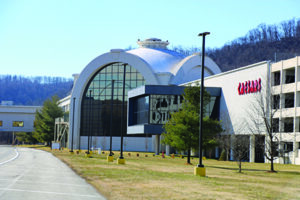 The outside of Caesars Southern Indiana casino is shown on the morning of Friday, Jan. 22. (SCOTT MCKIE B.P./One Feather photos)

ELIZABETH, Ind. – About 20 minutes from the bustling and growing city of Louisville, Ky., the Caesars Southern Indiana casino sits alongside the Ohio River in Elizabeth, Ind.  The 110,000 square foot casino, whose operations are now owned by the Eastern Band of Cherokee Indians and open in its current location since December 2019, includes over 1,200 slot machines; 73 tables for games including craps, blackjack, and others; 16 tables in a special poker room; a sports wagering area; a 503-room hotel; and two parking garages. 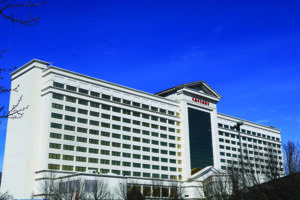 The hotel at Caesars Southern Indiana has 503 rooms and includes a spa, walking trail, and indoor pool.

“I think it’s really been a change of experience,” Brad Seigel, Caesars Southern Indiana general manager, said of the casino’s location change.  It opened in 1998 as a riverboat casino on the Ohio River and changed to its current structure, located on the same property, on Dec. 12, 2019.  “To be able to do that, in a setting like this, created a new entertainment experience.”

He added, “Everything is basically brand new from December of 2019.  Some of the buildings existed, but they were gutted down to the walls.”

Once re-opened in its current incarnation, the casino hit the ground running in December 2019 and operated strongly until March 2020 – then, COVID-19 hit the world. 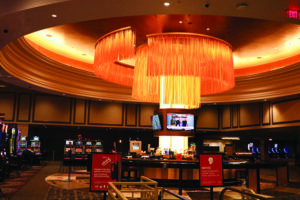 A large chandelier hangs over the Rotunda area of the casino floor.

“We saw a spike,” Seigel said of the move from the riverboat to the new building.  “In those three months, we saw between 25 and 30 percent higher through a lot of the marketing efforts that Andrew Miladin (marketing and communications director) did.”

The casino was closed in mid-March due to COVID-19 and re-opened in June.  Miladin stated, “We let everyone know about the safety measures we are taking and let them know that it’s safe to come back.  Safety is number one here.  Whenever guests started to come in, we let them know we are going to have some changes.  We made sure to list them on social media and put them on our website so everyone was informed.  And, people were glad and couldn’t wait to come back.”

The sports wagering area in the casino is known as the William Hill Sports Book and includes three giant-screen televisions for game-watching on-site as well as several fan cave areas for groups (during non-COVID times) to watch games and eat together.  Patrons of this sports book can place sports wagers online as long as they are in the State of Indiana.

“We offer the game-watching experience,” said Seigel.  “People will come in and make their sports bets and then go play blackjack for a couple of hours.” 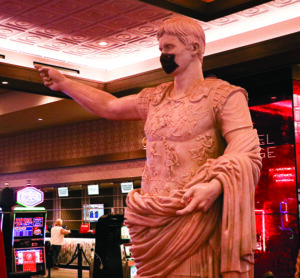 Guests to Caesars Southern Indiana are greeted by this Caesar statue on the casino floor.

Miladin added, “Or, they eat at the Piazza restaurants or make a reservation at our steakhouse.  It’s nice to kind of integrate a whole evening at Caesars as opposed to just popping in to place a bet.”

Jack Binion’s Steak; Aroma Cafe’ and Bar; the Piazza area which includes: The Grill, Homestyle, Pizza, Cantina, and Noodles; and the Laurel Lounge, a VIP club. 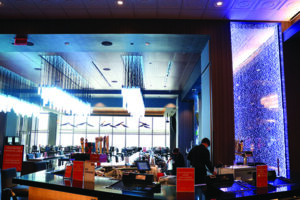 The hotel, which underwent renovations ending in 2017, has 503 total rooms including 19 full suites, two presidential suites, and 26 jacuzzi suites.  It also includes a spa area known as Indulge, a pond and nature trail area behind the facility, and an indoor pool.

For more information or to book a stay/visit at the property, visit: www.caesars.com/caesars-southern-indiana