The offices of Qualla Housing Authority (QHA) were raided by FBI agents and other law enforcement officers on the cold, misty morning of Feb. 2, 2017.  The investigation into possible wrong-doing and criminal conduct at QHA is now complete, and federal officials have determined there are “no prosecutable cases”. 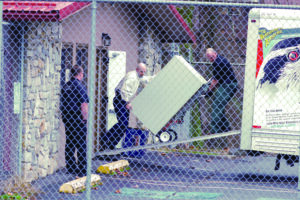 Agents with the FBI seized numerous file cabinets, such as the one shown in the photo above, as well as boxes of documents and computer files during a raid at Qualla Housing Authority on the morning of Thursday, Feb. 2, 2017. (SCOTT MCKIE B.P./One Feather photo)

In a letter sent to tribal officials, U.S. Attorney R. Andrew Murray and Assistant U.S. Attorney Richard Lee Edwards write, “In 2016, the United States Attorney’s Office opened a federal investigation of several Qualla Housing Authority loan programs, with the FBI as the investigating agency, as a result of a request from the then-Principal Chief (Patrick Lambert) of the EBCI who informed us of allegations that the Qualla Housing Authority had made loans contrary to regulations and requirements for such loans imposed by the federal government.”

The letter continues, “…the agents of both the FBI and of the Office of the Inspector General of the Department of Housing and Urban Development have extensively reviewed these files.  They also investigated the procedures and funding for the loan programs in question.  We have now completed the investigation, and we have concluded that there are no prosecutable cases regarding any violations of federal law.”

Federal officials never confirmed the exact extent of files seized on that February 2017 morning, but One Feather staff saw at least seven, large metal file cabinets seized.  According to the letter, the files and other documents seized that day are currently being held at the HUD Office of Inspector General.

In an email sent to EBCI tribal officials on Jan. 4, Michael McConnell, EBCI interim attorney general, states that he has sent an email to the U.S. Attorney General’s Office requesting that all of the files and documents be returned to his office for dissemination back to QHA.

A letter sent to QHA on Oct. 4, 2016 instructed the entity’s personnel and officials not to tamper with any documents relating to the case including “information concerning loans, loan applications, customer files, banking records, grant information, and all other business records”.  That ruling has now been lifted.

In an email from Edwards to John Pritchard, U.S. Attorney’s Office, Western North Carolina, Edwards writes, “…those preservation letters no longer apply and the Tribe should feel free to resume its normal document retention policies.”