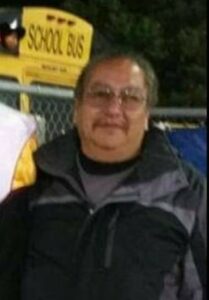 Steve Allen Teesateskie, 57, of the Big Cove Community in Cherokee passed away on Monday, Dec. 14, 2020.  Steve is preceded in death by his parents, Tom and Jeanette Teesateskie of the Snowbird Community as well as one brother, Pat Teesateskie.

At an early age, Steve was a logger with his dad. Prior to his passing, he was a groundskeeper at the Casino. He and his wife, Donna, enjoyed spending time together, especially elk watching. Steve loved NASCAR and was a fan of Rusty Wallace and Chase Elliott. He was a huge Cherokee Braves Fan. He also loved watching WWE and Kansas City Chiefs football. Steve was a handyman and would help out anyone. He loved being outdoors and being with his kids, grandkids and family. They were his pride and joy. Steve will be missed by many. He was a funny, smarty, big hearted guy with a great sense of humor. You would always find him laughing and cracking a joke.

The family will have a Visitation for Steve Allen Teesateskie at Long House Funeral Home on Thursday, Dec. 17, 2020 from 11 a.m. until 1 p.m. at which time the funeral service will begin. Matthew Tooni, David Smoker and  Brother Lane Smoker will reside over services. At 2 p.m. , Steve will be escorted by the Brothers In The Wind for one final ride to his final resting place at Lucy Driver Cemetery in the BigCove Community. Pallbearers will be Bug, Brent, Pat, and amongst family and friends.

If you plan to attend we ask that you please wear a facemask and practice social distancing. Thank you.