Ki Ree French, a member of the Eastern Band of Cherokee Indians from the Big Cove Community, has followed in the proud tradition of Native Americans serving in the U.S. Armed Forces.  He graduated, with Platoon 1088, from U.S. Marine Corps basic training at Parris Island, S.C. on Friday, Dec. 11. The graduation itself was live-streamed for families due to COVID-19 restrictions. 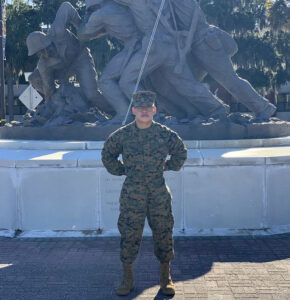 French graduated as a private and earned the Rifle Expert marksmanship badge.  He is now at Fort Lejeune in Jacksonville, N.C. for a five-week course known as Marine Combat Training.

Of his graduation day, he noted, “It was a mix of feelings.  I was proud of myself for making it, but then I was also upset that my family couldn’t be there.  I was more so just proud of my brothers and I earning the title.”

Prior to even arriving at Parris Island, he and the other trainees went to Atlanta, Ga. to quarantine for 14 days.  Upon arrival at basic training, French said it was a “culture shock”.

He tried to sleep as much as possible on the bus ride from Atlanta to Parris Island.  “The next thing I knew a drill instructor came onto the bus yelling at us to get off the bus.”

During the training, he particularly enjoyed the marksmanship training and thanked Sgt. Ramsey who was his instructor as well as his recruiter Sgt. Pond.

While there wasn’t much contact with anyone during basic training, French said he was able to write letters home, and he did earn a few phone calls from various challenges.

He appreciates all of the support. “I’d like to thank my family and my family friends.  No matter how hard it is here or how hard training is, they help me to just push through it.” 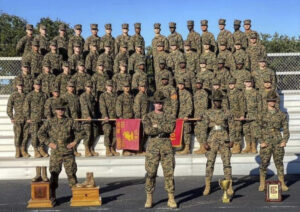 During the graduation, Lt. Col. Robyn E. Mestemacher, 4th Recruit Training Battalion commanding officer, said, “Three months ago, these young men and women set foot on our historic yellow footprints, and they’ve been challenged mentally, morally, and physically every day since.  More importantly, they’ve had to demonstrate our core values of honor, courage, and commitment in their actions in order to earn the title United States Marine.”

French recommends for other young people to join the military and said, “Make sure to do your research so you know what you’re getting yourself into.  It isn’t just a job when you join.  It becomes your life.”