Stretch of US 441 to be re-named after Beloved Man

Astretch of US 441 from Exit 74 to the intersection of N.C. 19 will now be known as the Beloved Man Dr. Jerry Wolfe Highway.  The N.C. Board of Transportation approved the designation on the afternoon of Wednesday, Dec. 2 in a resolution that states, “Dr. Wolfe served as a true testament of a Cherokee leader and should be recognized”.  The signage designating the highway will be written in both Cherokee and English languages. 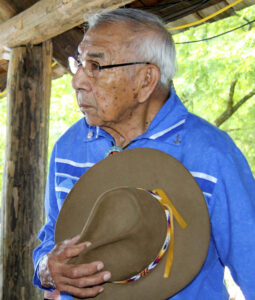 Beloved Man Dr. Jerry Wolfe, shown speaking at the Tri-Council meeting at Red Clay State Park on Aug. 28, 2015, has been memorialized with a section of US 441 named after him following a recent vote of the N.C. Board of Transportation. A small stretch of US 441 from Exit 74 to the intersection of N.C. 19 will now be known as the Beloved Man Dr. Jerry Wolfe Highway. (SCOTT MCKIE B.P./One Feather photo)

Dr. Wolfe passed away March 12, 2018 at the age of 93.  In 2013, Dr. Wolfe received the designation of Beloved Man of the Eastern Band of Cherokee Indians.  Prior to him, the last recorded instance of a Beloved Man was Little Turkey who died in 1801.

Principal Chief Richard G. Sneed said of the highway designation, “I am very grateful to the Jackson County Commissioners and the North Carolina Department of Transportation for supporting our resolution to have a section of Hwy. 441 named in honor of Beloved Man of the Cherokee Dr. Jerry Wolfe. NCDOT acted expeditiously in unanimously voting to approve the naming of the highway and I applaud their swift action.  This brings so much honor to Dr. Wolfe, his legacy, and his family.”

Dr. Wolfe was a noted storyteller and cultural ambassador and, for almost 20 years prior to his passing, was the official greeter at the Museum of the Cherokee Indian where he greeted visitors, told stories, demonstrated crafts, including making stickball sticks, and even sang Cherokee lullabies to babies.

“On behalf of the Museum, we are extremely pleased,” Dawn Arneach, Museum of the Cherokee Indian interim executive director, said of Wednesday’s announcement.  “He was an integral part of the Museum for many years and anytime someone came to visit him, he always took time for them to sit and talk. He quietly went about life but was a big part of life in Cherokee. It was amazing hearing him call the ballgames, share stories, say blessings such as at the opening of the New Hospital, singing in the language, and hearing him talk and laugh with other language speakers like he had known them his whole life.  He did so much for so many, and we could not be happier.”

During the Tribal Council session on April 11, 2013 when Dr. Wolfe was named a Beloved Man, Myrtle Driver, EBCI Beloved Woman and fluent speaker, spoke of his importance to the language and culture of the Tribe.  “Oftentimes, we may come across a word that we don’t remember or we need to know something about our history or our culture, and we can always go to Jerry, and he is always more than willing to help us.  And, I really do appreciate all that Jerry Wolfe has given us.”

Over the years, Wolfe received many prestigious awards and served on many boards including receiving the Patriot Award from the Civilian Marksmanship Program in 2013 and the being inducted into The Order of the Long Leaf Pine Society, one of the highest awards given in the State of North Carolina, in 2017.  He received the North Carolina Folk Heritage Award in 2003 for his work in preserving stickball.  Dr. Wolfe served in the U.S. Navy in World War II and was part of the famous Normandy Invasion on Dec. 6, 1944.

Dr. Wolfe provides a blessing for the Kanvwotiyi treatment center in the Snowbird Community immediately prior to the ribbon cutting on Dec. 18, 2017.

Western Carolina University honored Wolfe in May 2017 with an honorary doctorate of humane letters degree.  When he was given the degree, then-WCU chancellor David O. Belcher read a citation stating, “…you have served with exemplary distinction and dedication throughout your life as a member of your community and as a conservator and icon of Cherokee language and culture.  You have been a tradition-bearer for the Eastern Band of Cherokee Indians, preserving and teaching the Cherokee language, stickball traditions, knowledge of plants and traditional medicine, myth and legends, and oral history.”

Wolfe was called on many times to open meetings with a prayer or give words of encouragement at events.  At the historic Tri-Council meeting in August 2015 at Red Clay State Park in Red Clay, Tenn., he gave an impassioned talk about the importance of the Cherokee language.  “Our true identity is our language.  We must save our language and teach the youth coming along.  When a child is learning to speak, never make fun of them.”