Ethan Arch, a member of the Eastern Band of Cherokee Indians, has won a prestigious state award while bringing clean drinking water to the residents of the Qualla Boundary.  He is the recipient of this year’s J.A. Younts Award for Excellence in Water which is given annually by the North Carolina Rural Water Association (NCRWA). 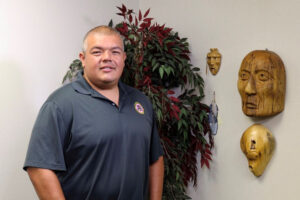 Ethan Arch, a member of the Eastern Band of Cherokee Indians, is the recipient of this year’s J.A. Younts Award for Excellence in Water which is given annually by the North Carolina Rural Water Association (NCRWA). (SCOTT MCKIE B.P./One Feather photo)

“I feel very honored to have even been recognized for such an award,” said Arch, manager of the EBCI Water & Sewer Operation and Maintenance Program.  “I could not do what I do without the help of all the Cherokee Water & Sewer staff, Water Treatment, and Wastewater staff and crews.  They are the silent heroes of everyday life that we all take for granted.  We are also blessed to have such great leadership above us to help us achieve all of our future endeavors.”

Information from NCRWA describes the award as follows, “The award winner for the J.A. Younts Award for Excellence shows a dedication to their job, their water systems, and also to rural water.  This person should set an example for others to follow by going beyond the call of duty to educate themselves and improve the water industry as a whole.”

He was nominated for the award by Jeremy Hyatt, EBCI Secretary of Operations, who told NCRWA, “Mr. Arch brings to the table a new and refreshing perspective for the operation of the water distribution and sewer collection systems on the Cherokee reservation.  As a leader, he leads by example and asks his staff to do nothing that he would not do himself.  As a manager, he understands the costs of change and weighs them appropriately against the expense of maintaining the status quo.”

The NCRWA presented several other awards including: