I watch a lot of sports – football, basketball, winter Olympic-style sports, teqball (I’ll explain later) – and it has been a wild ride watching the different venues on television this fall.  With COVID-19 surging yet again, it astounds me that some games are being played in front of thousands and thousands of fans. 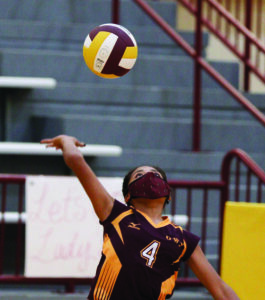 Dvdaya Swimmer, a member of the Cherokee Middle School Lady Braves volleyball team, serves in a recent match at the Charles George Memorial Arena. Like all players, she is wearing a mask while playing to help reduce the spread of COVID-19. (SCOTT MCKIE B.P./One Feather photos)

That being said, I would like to give a pat on the back for the wonderful job being done by the Cherokee Central Schools (CCS) Athletics team in keeping everyone as safe as possible during these trying times.  I have attended several events already this fall including multiple volleyball matches and home cross country meets – the only two sports currently being run.

First off, masks are required.  They would be anyways due to the Eastern Band of Cherokee Indians’ mask mandate, but CCS is very adamite that they be worn at all times.  Volleyball players even have to wear them while playing as part of a NCHSAA (North Carolina High School Athletic Association) rule.  And, I can attest that it is adhered to 100 percent of the time that I have seen so far at least.

Being a glasses wearer for the past 42 years, I will say that I am nowhere near a fan of having to wear a mask.  But, I do it, and I don’t complain.  If my mask-wearing helps keep someone else safe, there’s no hesitation from me.

During home volleyball matches at the Charles George Memorial Arena, CCS coaches and volunteers work furiously to keep the balls sanitized.  That’s right – they sanitize the ball after each and every point.  It is actually quite a sight to see.  Following each point, the ball is thrown to a volunteer on the sideline who immediately sprays the ball down with a sanitizer and then wipes it clean.  A second volunteer takes a clean ball and gives to the team to use in the upcoming point.  And, so it goes each and every point, each and every game, in each and every match for the day.

Crowd size is limited for volleyball to 25 home fans who represent the family members of the Lady Braves team playing (i.e. middle school, JV, or varsity).  After each game, those 25 fans must leave and the next set of 25 enter, and so on.

Now, these measures seem to be working fine so far, and CCS is doing an outstanding job of implementing each of them.

A challenge is on the horizon however.  Basketball season starts in early January, and as we all know, it is much more popular than volleyball.  I was a volleyball player myself, and I know – it is what it is.  Neither safety measures nor crowd sizes have been announced for basketball yet.  It should be interesting to see what is done as basketball is definitely king here in the Tarheel State.

But, CCS and other officials statewide will cross that bridge when it comes, and I have no doubt that Cherokee will continue with the same level of conscientious care towards players, coaches, and fans.

In closing, I am happy to see the level of commitment that CCS is exhibiting with their COVID-19 safety measures for athletics, and I must say it is very, very odd to hear the Charles George Memorial Arena so quiet.