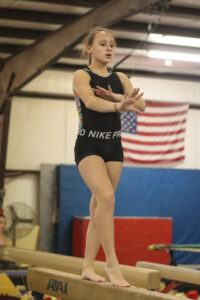 Sara Toineeta, a member of the Eastern Band of Cherokee Indians, works on her balance beam routine during a practice at New Vision Gymnastics in Franklin on the evening of Monday, Feb. 24. (SCOTT MCKIE B.P./One Feather photos)

She added, “I like doing it.  It’s really fun.  I’m in (Junior Olympic) Level 7, and we practice 16 hours a week; from 4 p.m. to 8 p.m. on Monday, Tuesday, Wednesday, Friday, and sometimes on Saturdays if we’re training for a competition.”

Shawnee, whose level is Xcel Gold, noted, “I really enjoy flipping around.  When I was younger, I couldn’t find a sport that I could stay in because I have ADHD.  My favorite event is the bars.”

April Ostojic, Sara and Shawnee’s coach, said of the program, “Right now, we have 15 levels at USA Gymnastics – the Bronze through the Platinum divisions and then the Junior Olympic program which is Levels 1 through 10.  We compete right now in the Bronze through Platinum and Levels 7, 8, and 9.”

She noted that the girls will be competing in one more regular meet before moving on to the state meets in a few weeks.  “The girls compete in four events – the vault, uneven bars, balance beam, and floor exercise.  All of the competitions they go to they will do a routine on each of those four events.” 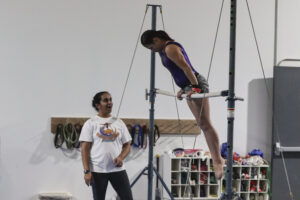 Shawnee Kirkland, a member of the Eastern Band of Cherokee Indians, works on her uneven bars routine.

Gymnastics is a family affair for both girls as it takes a family to make it happen.  “It’s a huge commitment for parents to come over here,” said Quana Winstead, Sara’s mother.  “She’s been competing since she was 6 and coming to gymnastics since she was 4.  So, we don’t really know of life any other way.”

She said that gymnastics has taught Sara many important life lessons. “It’s really good to see the girls when they make accomplishments – when they accomplish their goal that they set.  They work for months to accomplish one skill.  Then, they get one try at a competition to show that.  Sometimes, they do it and that’s great and they’re happy and proud of themselves.  Other times, I think it’s a really good way to learn disappointment and failure.”

Quana added, “I think it’s really taught her (Sara) how to be humble and to know that she just needs to try her best.  She doesn’t come here to be the best gymnast on the team.  She just really tries to be better than she was yesterday.”

Erin Kirkland, Shawnee’s mother, said gymnastics has helped her daughter grow and mature.  “She has ADHD.  So, when she was little, we did one year of basketball, a couple years of softball.  But, she’s always been turning cartwheels and putting on little shows in our living room – kind of like the floor routine.  Everybody kept saying, ‘you need to put her in gymnastics’.”

She also noted, “She’s (Shawnee) grown up a lot now, but when she was younger, gymnastics was the only thing that kept her focused because they’re always doing something.  They’re always moving, and they’re not waiting in long lines.”

Erin said other lessons and benefits have come from the sport as well.  “She’s been doing better in school.  In first grade, I held her back because she wouldn’t sit still long enough to learn how to read.  Now, this year, she was on the A Honor Roll both the first quarter and the second quarter.  I think this sport has helped by teaching them discipline.  Her last meet was on a Sunday and the next day we were right back in the gym.  So, they just keep coming back and working at it again.”

Quana said the challenges of the sport are rewarding for Sara.  “We all agree that this is the most difficult sport, physically and mentally.  Mentally, it can really be tough.  Gymnastics has taught her so much about how to take care of her body.  She has learned that when she eats well, she feels and performs better than when she doesn’t eat so good.  She knows that she needs to stay active and keep moving, and gymnastics really helps her have pride in her body, which, as a parent, is very important to me.”

Shawnee summed up her love of gymnastics and the goals she sets for herself within the sport, “I’ve learned that if you set your mind to something, you can do it with hard work and determination.”