Two Cherokee artists and their teacher are the recipients of a prestigious North Carolina Arts Council grant. The statewide Apprenticeship Grant is offered only once a year with only one artist team receiving the award. The grant allows for a master artist to work yearlong as a mentor to selected apprentices. The team consists of James R. Wolfe and Nathan Bush, both members of the Eastern Band of Cherokee Indians (EBCI), and William Rogers.

From the Snowbird Community, Bush has demonstrated the art of hammered copper at the Oconaluftee Indian Village since 2015. He began working at the Village as a gardener and moved on to become the program coordinator where he supervises the craft workers. He is an expert on medicinal plants, something he learned from his mother and grandmother as he was growing up.

An artist all of his life, Wolfe is from the Big Cove Community. As an artist, he has mastered several media, including pottery, basketry, carving, and metalworking. He is best known for his figurative sculptures complete with miniature weapons. After working at the Oconaluftee Indian Village as a historic interpreter for more than a decade, he set out on his own as a full time professional artist.

A master craftsman and mentor to the two younger smiths, Rogers maintains his studio in Cullowhee, where he makes custom metalwork and teaches. As a consultant, he developed the blacksmithing studio for the Jackson County Green Energy Park, adapting a gas forge to burn methane recovered from a former landfill site. With sponsorship from the Cherokee Preservation Foundation, from 2009-11, he was artist-in-residence at Cherokee High School, where he created two collaborative kinetic sculptures that are permanently installed in the school atrium.

Traditionally, eastern tribes used hammer stones to create images after first hammering copper nuggets into thin sheets. For the most part, only fragments remain, but archeologists have drawn in missing parts to allow a full picture to emerge. Among the best known pieces is a copper plate found in north Georgia depicting a hero figure wearing an elaborate headdress with a beaked nose resembling a falcon. While hammered copper is part of a Cherokee’s ancestry, only one metalsmith, Arch Miller, was listed as a charter member in 1946 when Qualla Arts and Crafts cooperative was founded. 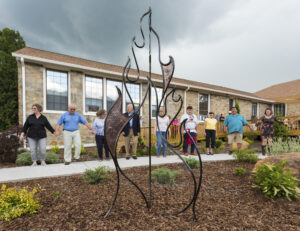 The traditional crafts—basketry, pottery, carving, beading, and weaving—have been the mainstay of the Oconaluftee Indian Village since its opening in the 1950s. It was there that Rogers met Bush and Wolfe. In 2013, a grant from the Institute of Museum and Library Services funded a project at the Oconaluftee Indian Village to revitalize metalworking on the Qualla Boundary. While Rogers taught over a dozen EBCI artisans how to hammer copper, it was these two who took up the craft with serious pursuit. After several years of diligent practice, both Bush and Wolfe were accepted into the Qualla Arts and Crafts co-op, an accomplishment afforded only the best at their craft.

In 2018, the trio created and installed an Eternal Flame sculpture for the Stecoah Cultural Arts Center. The seven-foot-tall freestanding sculpture was designed and fabricated by Rogers who incorporated original designs in copper by Bush and Wolfe. The team is currently working on a sculpture of Grandfather Buzzard for the new wing of the Cherokee Hospital.

The goal of this grant and past projects is not only to produce new and exciting art works, but also to revitalize and sustain a tradition. Aside from their own work, a testimony to the sustainability of this 21st century copper revival is the fact that the Cherokee Indian Fair included copper as a competitive category in the 2019 fair, for the first time in its 100+ year history.