KOLANVYI – Tribal officials and community members welcomed the official opening of the new Big Cove (Kolanvyi) Community Center on the crystal-clear blue afternoon of Friday, Feb. 21.  In addition to having a ribbon-cutting ceremony for the new Center, a groundbreaking ceremony was also held for the upcoming Big Cove Recreation Center which will be finished one year from this month. 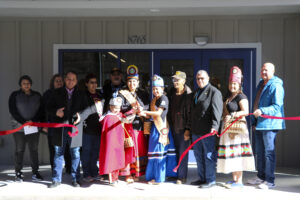 He added, “It’s a great day, and I look forward to all the great community meetings that will take place here.”

Big Cove Rep. Perry Shell said, “This started many years ago – the discussions and the idea for this new community building and the new gym.”

He then read the legislation which was submitted by himself and then-Big Cove Rep. Teresa McCoy, approved by Tribal Council on Sept. 2, 2014, that authorized the construction of the facility.

“In a way, it is kind of bittersweet because there’s a lot of memories and things that went on,” said Rep. Shell.  “There was a lot of good done for this community in the old Rec. Center.” 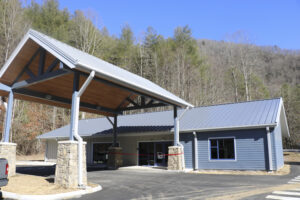 He thanked those involved in the construction and planning and noted, “It’s good to see this community building here.  There’s a lot of people that might not remember, but back in the early days, when we were teenagers, my dad had a youth group.  It was at the old Methodist Church right here on the side, and that’s where all the youth meetings started for the Big Cove Community.”

Johnson Architecture, of Knoxville, Tenn., designed the 3,600 square foot building which was constructed by Owle Construction. 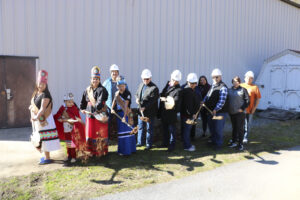