A sculptor has created a Trail of Tears Memorial piece that has been placed at Eagle’s Rest Park at Mt. Oglethorpe in Pickens County, Ga.  The piece, carved by Steve Stone of Marble Hill, Ga., will be dedicated in a ceremony at the site on Saturday, March 21. 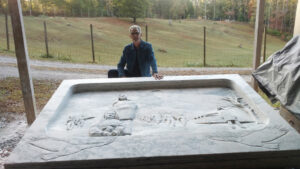 Steve Stone is shown with a marble carving he completed last year known as the Trail of Tears Memorial. The piece is now displayed at Eagle’s Rest Park at Mt. Oglethorpe in Pickens County, Ga., and a dedication ceremony is scheduled for the Memorial on Saturday, March 21. (Photos contributed)

“This area that I now live in was once at the heart of the Cherokee Nation,” said Stone.  “When I consider what took place here and along different points of the Trail of Tears, I try to bring to light what would tell the story of what happened there.”

The piece is 8-foot by 5.6-foot by 8 inches thick, and the marble was donated by Polycor Georgia Marble.  “Here, in Pickens County, Ga., where they once built their homes, I chose to depict a young family on the dreaded day the soldiers arrived to take them away.  I put the child up front and most prominent in the hope that she would melt the coldest of hearts.”

Stone said he visited Cherokee prior to beginning the carving.  “I came up to the Reservation and took pictures of the young ladies in the carving.  The older girl is Miss Aaliyah Swimmer and the little girl is Nevaeh Saunooke.  Neither family would accept payment for their contribution.”

His journey into sculpting goes back to 1996 when he carved his first piece.  “I was working as a mussel shell diver in the Tennessee River at Waterloo, Ala. at that time.  I had broken my heel bone playing softball and was laid up unable to work due to the cast on my foot.  My wife and I had three sons – ages 12, 10, and 3.  My two oldest boys brought up a beautiful slab of ebony slate rock from the creek we lived on.  They laid it on the picnic table where I was sitting, and I took out my pocketknife and carved a Native American face on it – my first carving.”

That led to a passion. 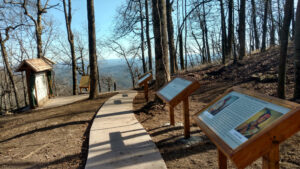 This photo shows the Memorial, on left, in relation to other displays at Eagle’s Rest Park.

“The boys kept bringing me rocks, and I kept carving,” said Stone.  “I eventually wound up with seven of those slate rock carvings before the second Trail of Tears Motorcycle ride came to Waterloo.  I also had written my first poem on July 4th of that year entitled ‘Lost Lake Cherokee’.  I drew a picture of the Cherokee arriving in Waterloo to board the boats on their Trail of Tears trek and had the poem superimposed over the picture – my first drawing.”

Following the motorcycle event at Waterloo, Stone said, “I began to look for a more stable stone to carve.  I was amazed to discover there was a new marble quarry within five miles of my home that I did not know about.  I contacted the owner of the quarry and in exchange for the marble scraps they produced, I carved them a dinosaur – their logo and my first marble and three-dimensional carving.”

Stone hopes that his Trail of Tears Memorial carving will make people think of the Indian Removal events.  “There are three things I hope the Memorial will cause people to consider.  One, the Removal was wrong, heartless, illegal, and should have never happened.  Two, if we allow our government to inflict these kinds of horrors on any group of people, it could happen to them as well.  Three, God, The Great Spirit, or whatever we choose to call him, sees all.”

Information from the Mt. Oglethorpe Foundation website states, “It may seem odd that a Trail of Tears Memorial is being added to the top of Mt. Oglethorpe, but there is a good reason.  A number of Indians, both Cherokee and Creek, were marched across the top of the mountain in the summer of 1838 on their way to a temporary collection fort located near the current Waffle House in Ellijay, Ga.  The Indians remained a short while at this fort before being marched to Charleston, Tenn. Where they began the 835-mile journey to Oklahoma.”

Stone is currently working an 8-foot by 2-foot by 2-foot bench for the Memorial site that will be carved into a feather from a piece of poplar.  In speaking of the placement of the Memorial piece, he noted, “Eagle’s Rest Park, to me, is the location God provided when I was ready to do what I had felt he had called me to do 24 years ago.”