Luzene Hill is an artist that likes to push boundaries.  Her work has been exhibited widely including in a new show entitled “Indigenous Futurisms” which opened at the IAIA (Institute of American Indian Arts) Museum of Contemporary Native Arts in Santa Fe, N.M. on Thursday, Feb. 13. 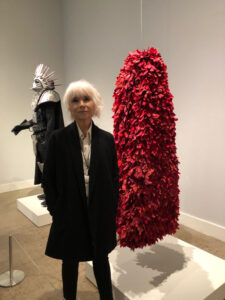 EBCI artist Luzene Hill is shown with her work “Enate”, a piece containing 6,956 cochineal dyed silk taffeta goddess silhouettes, at the opening of the “Indigenous Futurisms” show at the IAIA Museum of Contemporary Arts in Santa Fe. (Photos contributed)

“I’m very pleased to be in another show in Santa Fe and to be included in this show curated by Suzanne Fricke, Ph.D., which ties my interest in earliest female images and Indigenous matrilineal culture to a larger art context,” said Hill, a member of the Eastern Band of Cherokee Indians.

She noted, “The work I have in this show is the outer cape from the installation I had at the Portland Museum in 2017.  That work is entitled ‘Enate’ and is made up of 6,956 cochineal dyed silk taffeta goddess silhouettes.  That is the average number, per a 12-year study, of reported assaults on Native women in the United States.”

Hill has been recognized far and wide for her out-of-the-box art including receiving the following fellowships: 2015 First People’s Fund Fellowship, 2015 Eiteljorg (museum in Indianapolis, Ind.) Fellowship, 2016 NACF (Native Arts and Cultures Foundation) Fellowship, and the 2019 Ucross Fellowship.  This June, she will be a visiting artist at the Anderson Ranch Art Center in Snowmass Village, Colo.

Always creating, Hill is currently working on a new installation for a show entitled “Feminisms” that will open Sept. 26 at the 516 Gallery in Albuquerque, N.M.  “This work, ‘Retribute’, continues the goddess motifs and the issues of matrilineal culture being obliterated by patriarchal colonialism.  I’m also working on ideas for my artist residency in April in Santa Fe and a visiting artist project in Aspen this summer.” 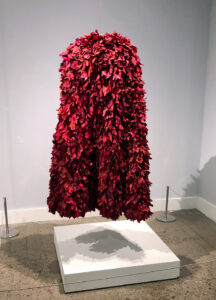 Her work continues to evolve and change.  “My residency last summer at Ucross was truly transformative – especially in the way it opened up my perspective and enhanced my confidence…to take more risks with my work and to push myself.”

Information from the IAIA explains the thoughts behind the “Indigenous Futurisms” show and states that it, “…highlights artworks that present the future from a Native perspective and illustrates the use of cosmology and science as part of tribal oral history and ways of life.  The science fiction and post-apocalyptic narratives depicted in these artworks are often reality for Indigenous communities worldwide.”