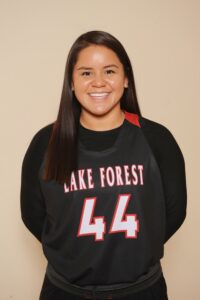 GRINNELL, Iowa — The Midwest Conference (MWC) announced its Performers of the Week award recipients for men’s and basketball the week of Feb. 10-16 on Monday, Feb. 17.

Feather racked up 50 points as Lake Forest split a pair of games last week. She shot 6-for-8 on three pointers and scored a career-high 28 points, including 21 in the fourth quarter, during Wednesday’s (Feb. 12) 90-82 triumph over Lawrence. The Foresters fell 92-90 in overtime at Illinois College on Saturday (Feb. 15) with Feather knocking down five of nine attempts from beyond the arc and finishing with 22 points. She also grabbed 10 rebounds, dished out 9 assists, and added 6 steals in the two games combined.

Espinosa scored or assisted on more than half of Lake Forest’s points in a 108-76 victory over Lawrence on Wednesday (Feb. 12) and a 92-90 triumph at Illinois College on Saturday (Feb. 15). He finished Wednesday’s game with 34 points and 10 assists before posting another double-double with 19 points and 11 assists on Saturday. Espinosa shot 60 percent from the field and 50 percent (7-for-14) from three-point range while adding 13 rebounds and 4 steals in the two games combined.

MWC sports information directors nominate student-athletes for the Performer of the Week honor by sport and winners are selected by the MWC staff.