The Southeastern Association of Cultural Studies (SEACS) held its first annual conference from Feb. 7-8 in Charlotte.

The conference is made up of 24 panel presentations across two days, with a keynote speaker on the second day. The topics of these presentations range greatly, and the event brings in scholars from all across the region. 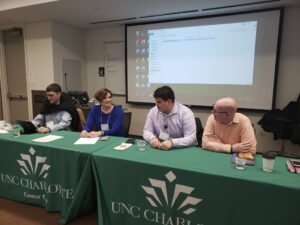 The panelists who each presented on indigeous literature at the recent Southeastern Association of Cultural Studies (SEACS) in Charlotte are shown, left to right: Dr. Paul Worley, Annette Clapsaddle, Jonah Lossiah, and Michael Redman. (Photo contributed)

Dr. Paul Worley, who is the SEACS Journal editor and an associate professor in WCU’s English Department, said that he has been going to this conference since the 1990s when it was under the name Philological Association of the Carolinas (PAC).

“I think it’s really important to know your colleagues not just on a national or international level, but also on a regional level. So, it’s a chance to get together with people. It’s a chance to communicate,” said Worley.

Worley and Michael Redman, a recent graduate of the WCU’s Master’s Program in English, helped to organize a panel discussing Indigenous Literature.

They invited Annette Saunooke Clapsaddle to take part in this discussion. Clapsaddle, a member of the Eastern Band of Cherokee Indians, plans to release her first published novel “Even As We Breathe” this October. Her book was picked up by the University of Kentucky Press last year. The Cherokee One Feather also accepted an invitation to be on the panel.

Worley said that to build relationships with people and places, you have to step back and listen to what they have to say. In the case of Cherokee, he said he is excited to continue working with Cherokee writers and establish as much of an understanding with the region as he can.

“I think we can use these academic fora that traditionally have been so alienating as platforms to do things differently and create more collaborative relationships, you know just in the region,” said Worley.

“Dynamics of representation are so important. Annette Clapsaddle’s presentation was also really fantastic. Coming from the perspective of a creative writer. This is something that I think has once again erupted into the national consciousness with what’s going on with the novel ‘American Dirt’ which is about the immigrant experience from Mexico, but written by a white woman who, I think she says at one point she spent ten days in Mexico. So, she knows enough about Mexico to write this novel. This is a problem.”

Clapsaddle that she is also excited by the prospect of a more productive relationship between the Tribe and WCU.

“If not Western, then who? Literally, it’s on Cherokee land. And, it’s part of their mission to be involved in the community. Cherokee is part of that community,” said Clapsaddle.

She said that she is aware of shallow grabs at “inclusion”, but that this invitation was not one of those. She said she was honored to join the panel.

“I think it’s acknowledging that expertise exists in different facets and different places. It’s not like, you know it’s oftentimes ‘come and perform for us’.  But this felt more like ‘we respect what different scholars or writers have to say about this topic, and we think it will inform the topic’; not just come be a token on the panel. It didn’t feel like that.”

Clapsaddle presented “Voices of Fiction: Native Style” and spoke from her personal experiences studying Native American literature and growing up in Cherokee.

“I think it’s really important. A lot of times at these academic conferences, you only have folks who operate in a sphere of a four-year institution. And for literature specifically, or any kind of art form, to continue to change and live and thrive, it has to have some cultural context. And it really should involve dialogue with the community. So, I think it’s really important that native literature doesn’t just live on the page in a classroom or a university, that it’s really informed by a diverse group of voices.”

Clapsaddle says that she still runs into roadblocks at times when presenting her work, so continuing the conversation and educating is essential.

“I want to tell a story; I’m not trying to give a history lesson or teach legal theory to my readers. So, it’s always a constant balance. And every time I speak to a broader audience, I am surprised by what I need to example. Just because people aren’t exposed to it.”

“I never feel 100 percent good about something I’ve written regarding Cherokee until someone I know locally reads it and kind of says, ‘yeah, that works’ or ‘that sounds right’.  I’m not talking about some literary scholar reading my work. I need to know that my voice, the way I depict Cherokee or its people, feels authentic and honest. That’s where I am. That’s what’s most important to me, so there’s some pressure there,” said Clapsaddle.

Worley said that he wants to be more involved in the Cherokee community and that continuing the dialogue is an important aspect of that.

“The panel itself is a first step. Hopefully, we can work together and see what we can do moving forward,” said Worley.

“One of the things that hopefully will be officially approved by the university at the end of the semester is, the English department has recently been approved to begin participating in the interdisciplinary concentration in Cherokee studies. And from there, I think a lot of it is talking to people who live in Cherokee and her community members about what they would like out of this particular program of study coming out of English.”

Worley said that he is hoping that outreach from the school continues and that a variety of voices find their way to WCU’s campus. Clapsaddle is one who will be recognized, as she has already accepted an offer to be a presenter at WCU’s literary festival in 2021.

The university has held several events to honor Cherokee and brought together community leaders, and now it’s time to take the next steps in communication.