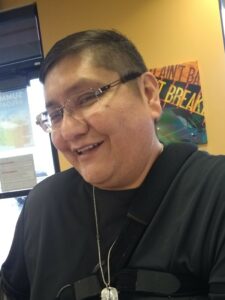 Patrick P. West, of Cherokee, went to his Heavenly home on Feb. 13, 2020 after a long battle with cancer. He will be greeted at Heavens gate by his father and mother, Paul “Bucky” and Mary West along with his brother, Roman West. His maternal grandparents, Walter and Sally Jackson, and his paternal grandfather, Cecil West, will also be welcoming him.

Patrick is survived by his three children, Ty, Syrena, and Kyra West, all of the home. Along with his sister, Sis West, he is survived by his paternal grandmother, Amy West-Thompson and “Poppy” Joe Thompson; aunt, Deb West; uncle, Richard Sneed Sr.; nieces, Anna Cline and Amy West; nephews, Damion Cline, Sylas Davis and Lucian Davis; along with Victoria Sandoval and his special friend, Chantele Lossiah.

Patrick was a member of Waterfalls Baptist Church but he also enjoyed attending Bigwitch Baptist Church. He loved baking, but his specialty was making cupcakes. An avid Georgia Bulldog Fan, when he was not watching his team play or in his kitchen baking, Patrick enjoyed being outdoors or spending time with family and friends. If you knew Patrick, you knew that he always had a smile on his face.

The family will have visitation for Patrick P. West at Acquoni Baptist Church on Sunday, Feb. 16 beginning at 6 p.m. and lasting till 11 p.m. Funeral services will begin on Monday, Feb. 17 at 11 a.m. with Pastor Ben Reed and Pastor James “Bo” Parris officiating.  Internment will be in the Wolfetown Community at Jackson Cemetery. Pallbearers will be Lino Sisengchanh, Sylas Davis, Neklye Lossiah, D.J. Wolfe, Albert Martin, and Earl Martin.