ON THE SIDELINE: Santa Maria leads with a calm intensity

Sterling Santa Maria is one of those rare athletes that plays and leads with a calm intensity.  Now, what does that mean?  He gets amped just like any athlete, but he enters each sporting event with a calmness that is rare in high school sports. 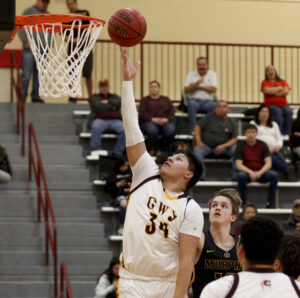 Sterling Santa Maria, a senior at Cherokee High School, is shown making a layup in a Feb. 3 game against Murphy in which he scored a career-hight 47 points. (SCOTT MCKIE B.P./One Feather photo)

Even when the atmosphere at a game is insane and people are yelling and screaming and upset, Santa Maria remains calm.  He seems to have a wonderful ability to concentrate on the task at hand, and he usually does it with a smile on his face.

A member of the Eastern Band of Cherokee Indians from the Yellowhill Community, Santa Maria is a multi-sport standout in football, basketball, and track and field.  He was a member of the 2017 Cherokee Braves football team that won the school’s first state championship, and he also placed second in the shot put event at last year’s Smoky Mountain Conference meet, 1A West Regional meet, and the 1A State Championship meet.  With track about to start, I imagine we’ll see similar if not higher results this season.

The other night, Santa Maria dropped a career-high 47 points against Murphy.  And, it was a calm, quiet 47 points.  That’s how he approaches sports.  He will score 25 or 30 or 40 points or place second in the state in the shot put, and you will not fully realize what he did until it is over.  He was named to the Big Smoky Mountain Conference honorable mention team in basketball for the 2017-18 season and was named All-Conference in 2018-19.  He is a shoe-in to make that team and hopefully All-Region this season.

After he scored his 1,000th career point in basketball in January 2019, I interviewed him in the parking lot at Robbinsville High School.  Always respectful and articulate, Santa Maria commented, “I’ve been working towards it since freshman year, and I’m just trying to work hard every day, get better, make shots.”

His work ethic is to be respected as he continues to improve game after game, year after year.

Most importantly, that work ethic spills over into the classroom.  Last May, as a junior, he received one of Cherokee High School’s coveted Academic Awards, and he was recently named to the CHS Principal’s Honor Roll.  Santa Maria is set to graduate near the top of his Class of 2020, and it was announced during the recent Winter Sports Senior Night that he has been accepted to and will attend the University of Oregon in Eugene, Ore.

Plato, Athenian philosopher (427 BC – 347 BC), wrote, “He who is of calm and happy nature will hardly feel the pressure of age…”

Santa Maria, while remaining an intensely focused and affective athlete, embodies that doctrine.  I know he will continue that mentality as he moves on to further his education.