Western Carolina University’s Health and Human Sciences Building reopened Monday, Feb. 10 after county, state and university officials found no public health or safety issues at the building in the wake of a potential hazardous materials incident that resulted in its evacuation.

Shortly before 9 a.m. Thursday, Feb. 6, several building occupants began complaining of light-headedness and other symptoms. Emergency response teams, upon arriving at the scene to find numerous individuals requesting medical assistance, made the decision to evacuate the building and to lock it down. 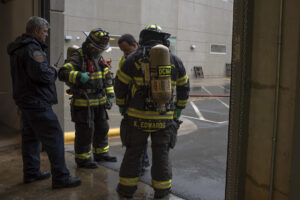 Shane Stovall, WCU director of emergency services, reports that seven occupants of the building – six students and one faculty member – were transported to Harris Regional Hospital in Sylva for treatment; all have been released from hospital care. Several dozen individuals who were in the building also were evaluated by emergency responders and University Health Services personnel, Stovall said.

After the evacuation and lockdown, response teams from Cullowhee Volunteer Fire Department, the Regional Response Team 6 of Asheville and WCU Safety and Risk Management conducted room-by-room inspections and monitoring of the building throughout the day on Feb. 6. University Safety and Risk Management continued air-quality testing on Friday, Feb. 7. Those efforts revealed no immediate definitive cause for the incident.

Following the monitoring and testing by the Regional Response Team and the Office of Safety and Risk Management, the North Carolina Department of Public Health informed the university Thursday evening that it was safe for people to return to the building. Out of an abundance of caution, the Office of Safety and Risk Management conducted further testing and monitoring on Friday with no findings. After consultation with the Jackson County Department of Public Health and University Safety and Risk Management, WCU officials announced Friday afternoon that classes and laboratory sessions would resume on Monday. The various health clinics located in WCU’s Health and Human Science Building also are scheduled to reopen.

University Safety and Risk Management will continue to monitor air quality and will conduct walk-throughs every hour on the hour for the next week, said Jon Maddy, director of safety and risk management.

“It is during incidents like these that we are reminded of the extensive network of folks who must come together and work as a well-coordinated team to ensure the safety of our campus. I’m very proud of the efforts from so many individuals,” Brown said.

Brown commended WCU’s student-run Emergency Medical Services Team, which was the first on the scene, and the leadership, faculty, staff and students of the College of Health and Human Sciences for their roles in responding to the incident.