Elk herd is a large tourism draw for Cherokee, Park

After being gone from the mountains of western North Carolina and eastern Tennessee for around 150 years, awi egwa, or elk, were reintroduced to the area in 2001.  Now, 19 years later, the herd continues to grow each year and the elk themselves have become celebrities drawing throngs of tourists to the area.

“The Park experienced a 7.1 percent increase in visitation through the Oconaluftee entrance to the Park over the previous year and about 15 percent higher than the 10-year average,” Dana Soehn, Park spokesperson, told the One Feather.  “This increased visitation is likely due, in part, to the opportunity to see elk in the fields near the Oconaluftee Visitor Center.  There are limited opportunities to see a wild elk herd in the eastern United States, which makes this a particularly special part of a Smokies visit for many families.” 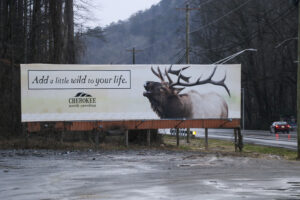 A billboard on Soco Road in the Painttown Community welcomes visitors to Cherokee with the enticement of seeing an elk. (SCOTT MCKIE B.P./One Feather photos)

Park Superintendent Cassius Cash said in a statement, “I am very proud of our employees who work hard each day, along with our volunteers and partners, to help provide outstanding visitor experiences and to protect the resources that people come here to enjoy.  With growing visitation, this has become more challenging.  In 2020, we’ll be inviting people to help us thoughtfully look at how we can improve access and continue caring for this very special place.”

Park officials and volunteers are a frequent presence when the herd is out in numbers in areas such as Cades Cove or the field adjacent to the Oconaluftee Visitor Center just outside of Cherokee.  It is federal law that people must keep at least a 150-foot distance from wild animals in the Park, and that is the main area of management that Park officials concentrate on. 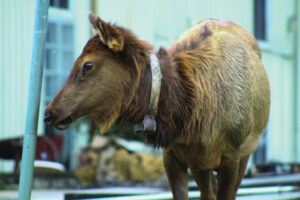 This elk, part of a herd of about 12, was seen in front of the Steve Youngdeer American Legion Post 143 headquarters in the Yellowhill Community on the afternoon of Thursday, Feb. 25, 2016.

“The elk herd is considered to be a wild, self-sustaining population that moves freely across the landscape both inside and outside the Park,” said Soehn.  “We continue to work with land management agencies outside the Park, like the North Carolina Wildlife Resources Commission, to better monitor the growth and dispersion of the herd.  There are no upcoming changes to managing elk inside the Park.”

Information from the National Park Service on the elk states, “The last elk in North Carolina was believed to have been killed in the late 1700s.  In Tennessee, the last elk was killed in the mid-1800s.  By 1900, the population of elk in North America dropped to the point that hunting groups and other conservation organizations became concerned the species was headed for extinction.”

A total of 25 elk, from the Land Between the Lakes National Recreation Area, were introduced into the Park in 2001 – 27 the following year.

So, how large is the herd in the Park now?  Well, that’s difficult to say.

Soehn said that a 2013 estimate numbered the herd at around 140.  “We know the herd has grown since then and expanded across western North Carolina, but we haven’t had a reliable technique to estimate the population since then due to the regional spread, topography, and dense vegetation.  Many elk population estimate tools used out west are done from the ground or air and are based on being able to visually see the animals.  That simply doesn’t work well here.”

She did relate that the Park is currently working with the N.C. Wildlife Commission on a joint study using GPS collars and a pellet survey method using DNA, and they hope to have those findings in the next year.

The Eastern Band of Cherokee Indians is involved in the management of the elk herd as well – being neighbors with the Park.

“We work along with the Park, but we manage them separately than they do,” said Caleb Hickman, Ph.D., EBCI supervisory Fisheries and Wildlife biologist.  “They have their own biologists.  We have our own biologists.  We work together on some aspects of sampling, but when it comes to damage and nuisance issues, we’re separate completely.”

He said that while the Park is in close proximity to the Qualla Boundary, the elk pose different sets of issues for Cherokee residents.

Hickman, a Cherokee Nation citizen, commented, “These animals are native and over 200 years ago Cherokee folks co-existed with them…I think there were other mitigation strategies back then, but no one’s alive now to tell us how they did it.  Now, we’re using modern methods because we don’t know what people did.  Electric fences really do work.  We know they work.”

He said the current size of the herd is around 160, but that is still just an estimation as Park and tribal officials have been involved in various ways of counting the herd including taking DNA samples from scat.  “Eventually, what I hope to get out of it is just how healthy the population is.  From the data you can basically get what the genetic diversity is like and how healthy they are.”

In talking about the 160 estimation, Hickman said, “If that’s true, then it hasn’t grown a lot since 2002.  That should tell you something.  But, the genetics are going to tell us if they have ‘bottlenecked’ and if they’re inbred.”

Hickman related there were four elk mortalities in late 2019, between Christmas and New Year’s – three were road fatalities and one was a natural death.

On the one deemed a natural death, he said, “We got it to a lab and there was a full necropsy done, and it was of natural causes.  It died of a hernia in the internal wall of its body cavity, and this type of herniation could be a genetic defect.   If we start seeing that, then we’re going to start asking the Park and the state that when they do their necropsies to figure out what the death is.”

He added, “Road mortalities are easy, but we need to start looking for genetic defects as well.  If that’s the case, it might help to bring in new DNA.”

Currently, the EBCI Natural Resources program is working on a study to find out economic impact of the elk as well as garner community knowledge and thoughts on the elk herd.  The study is being conducted by Responsive Management, a firm from Virginia that conducted a similar study for the Tribe several years ago on the fishing industry in Cherokee.

The study involves a random call survey to EBCI tribal members ages 18 and over.  “We’re going to find out what people think elk should be used for…should we hunt them or not?  And, other questions will be asked like do you think they’re important to the ecosystem?  We want to know what people know and what they think.”

He also said garnering community knowledge about the elk will identify what misconceptions about the herd exist.  “That will help us guide our outreach efforts.  This guides our management.”

In addition to the survey for EBCI tribal members, Responsive Management is also doing a survey for tourists regarding their thoughts and decisions regarding elk viewing.  “We’re going to find out how much elk are worth.”

For instance, one sample question is ‘If you’re going fishing and choosing between here and other destinations and you know elk can be viewed here, will that impact your decision?’

According to information from the Rocky Mountain Elk Foundation (RMEF), “Prior to European settlement, about one million elk roamed nearly all of the United States and parts of Canada.  Today, about one million elk live in the western United States, Wisconsin, Michigan, Minnesota, Missouri, Pennsylvania, Arkansas, Kentucky, Tennessee, Virginia, West Virginia, and North Carolina, and from Ontario west in Canada.”

Kim DeLozier, RMEF conservation program manager and former wildlife biologist with the Great Smoky Mountains National Park, said it takes around $1 million to reestablish an elk herd in an area.  “We provide some technical support, and we also continue to provide financial support.  And, that financial support really comes through the PAC (Project Advisory Committee) which is a program where all the fundraising that the Elk Foundation does, whether it’s our annual fundraisers, donations, membership – a portion of that comes back to the state.”

Part of that money comes to North Carolina to help the herd for management, research, and habitat improvements.  “We want to continue to put money back into taking care of the herd, doing research or management, or habitat work.  The biggest part of the future is going to be habitat.  They’re here right now, and so obviously we’ve got to make sure they’ve got a good place to live, something good to eat, and a good environment.”

He added, “We want to put as much money into habitat work as we can.  The Tribe is one of those offices that has done good work on habitat.”

If you have any elk issues in the Cherokee community, you are encouraged to contact the following staff of the EBCI Natural Resources Cherokee Fisheries and Wildlife program: Dallas Bradley 359-6117, cell 788-9193 or Paula Price 359-6110.